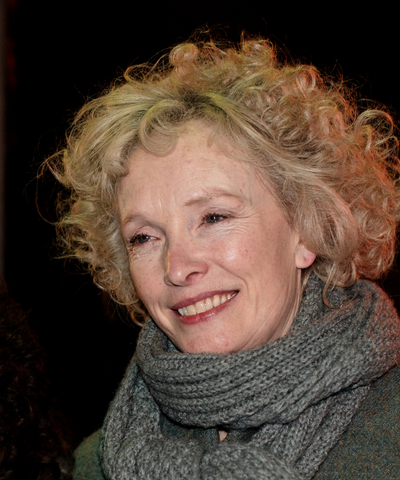 Lindsay Vere Duncan, CBE (born 7 November 1950) is a Scottish stage, television and film actress. On stage she has won two Olivier Awards, a Tony Award for her performance in Private Lives, and another Tony Award nomination for her role in Les Liaisons dangereuses. Lindsay has starred in several plays by Harold Pinter. Her most famous roles on television include: Barbara Douglas in Alan Bleasdale's G.B.H. (1991), Servilia of the Junii in the HBO/BBC/RAI series Rome (2005–2007), and Adelaide Brooke in the Doctor Who special "The Waters of Mars" (2009). On film she voiced the android TC-14 in Star Wars Episode I: The Phantom Menace (1999), and she played Alice's mother in Tim Burton's Alice in Wonderland (2010). She was appointed CBE (Commander of the British Empire) in 2009 for services to drama.

Duncan was born in Edinburgh, Scotland, in a working-class family; her father had served in the army for 21 years before becoming a civil servant. Her parents moved to Leeds, then Birmingham when she was still a child. Duncan attended King Edwards VI High School for Girls in Birmingham through a scholarship. Despite her origins, she speaks with a Received Pronunciation accent. As of 2011, her only role with a Scottish accent is AfterLife (2003).

Duncan's father died in a car accident when she was 15. Her mother was affected by Alzheimer's disease and died in 1994; she inspired Sharman Macdonald to write the play The Winter Guest (1995), which was later adapted as a film by Alan Rickman.

Duncan's first contact with theatre was through school productions. She became friends with the future playwright Kevin Elyot, who attended the neighbouring King Edward's School for boys, and followed him to Bristol, where he read Drama at University. She did a number of odd jobs while staging her own production of Joe Orton's Funeral Games.

Duncan joined London's Central School of Speech and Drama at the age of 21. After her training she started out in summer weekly rep in Southwold to gain her Equity card. She appeared in two small roles in Molière's Dom Juan at the Hampstead Theatre in 1976, and she joined the Royal Exchange Theatre, Manchester when it opened. In 1978 she returned to London in Plenty by David Hare at the National. She appeared on the television in small roles in a special episode of Up Pompeii! and in The New Avengers, and a commercial for Head & Shoulders shampoo. She made her breakthrough on Top Girls by Caryl Churchill, created at the Royal Court in London and later transferred to The Public Theater in New York: her performance as Lady Nijo, a 13th-century Japanese concubine, won her an Obie, her first award. The next year she took her first major role on film in Richard Eyre's Loose Connections with Stephen Rea. At the same time her television work included a filmed version of Frederick Lonsdale's On Approval (1982), Reilly, Ace of Spies (1983) and Dead Head (1985).

Duncan is married to fellow Scottish actor Hilton McRae, whom she met in 1985 at the Royal Shakespeare Company. They live in north London. They have one son, Cal McRae, born September 1991.

Duncan was appointed Commander of the Order of the British Empire (CBE) for services to drama in the 2009 Birthday Honours.