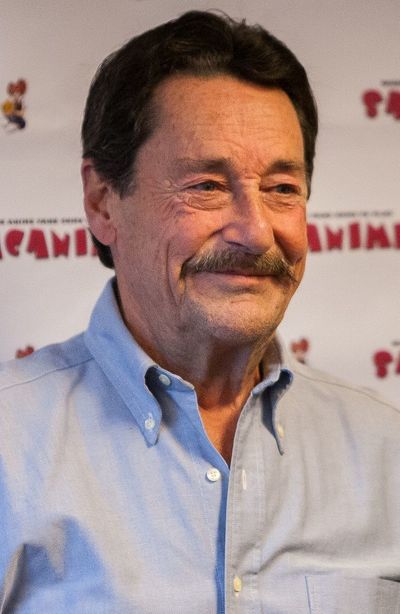 Peter Claver Cullen (born July 28, 1941) is a Canadian voice actor. He is best known as the voice of Optimus Prime (as well as Ironhide) in the original 1980s Transformers animated series, and most other incarnations of the character. He has also voiced several other characters, including Eeyore in the Winnie the Pooh franchise, Monterey Jack in Chip 'n Dale Rescue Rangers, and KARR in Knight Rider. In 2007, Cullen returned to the role of Optimus Prime in various Transformers media, starting with the first live-action film.

Cullen was born on July 28, 1941 in Montreal, Quebec, to Henry and Muriel (née McCann) Cullen. He has three siblings: Michaela, Sonny, and Larry. Cullen attended Regiopolis-Notre Dame Catholic Secondary School. He is a member of the first graduating class of the National Theatre School of Canada, which he graduated in 1963. His brother, Larry Cullen, was a retired Captain in the United States Marine Corps, and helped inspire the voice of Optimus Prime.

In 1968, he and Joan Stuart appeared as "Giles" and "Penelope" in L'Anglaise, a recurring segment about a French-Canadian man with an English-Canadian wife, on the CBC Radio comedy series, Funny You Should Say That.

Cullen played a French-Canadian astronaut character named Commander Bi Bi Latuque alongside Ted Zeigler for the 1969 children's show, The Buddies on CFCF-TV in Montreal. He honed his voice skills by working as a radio announcer, notably in his home town of Montreal on (then) MOR station CKGM doing the overnight and weekend swing shifts. From 1967–69, he was the announcer for Smothers Brothers Comedy Hour.

Cullen recalls auditioning for the role of the robot superhero Optimus Prime at a casting house in Burbank, California, explaining that as he read Prime's character breakdown, he saw that it was "the opportunity of the year", and heeded his brother Larry's advice: "Peter, don't be a Hollywood superhero, be a real superhero. Real superheroes don't yell and act tough; they are tough enough to be gentle, so control yourself." Cullen later learned from his agent, Steve Tisherman, that he not only won the part of Prime, but also, to his surprise, the role of Ironhide as well, which he saw as a "home run".

He has stated that Optimus is his favorite voice role, and that he based the voice of the Autobot leader on his older brother Larry, who served in Vietnam. "When he came home, I could see a change. He was quieter and he was a man and a superhero to me," says the actor. "I watched him and listened to him. I'd never had an opportunity to do a superhero, and when that came, [that voice] just came right out of me and I sounded like Optimus."

He has also stated that he had no idea of Prime's popularity until the character's controversial death in the 1986 animated film, as the studio had never given him fan letters from children addressed to Optimus. The public backlash over Optimus' death surprised producers greatly. Children were leaving the theaters because of the character's death. The writers temporarily revived the character for a single episode in Season 3 called "Dark Awakening". Initially, this was intended to be his final appearance, but after fan requests continued, "The Return of Optimus Prime", a two-part episode was produced. The original ending of "Dark Awakening" was altered in reruns to include a teaser about the return of the character.

Cullen reprised the role of Optimus Prime in the 2007 Transformers live-action film, and its sequels Revenge of the Fallen, Dark of the Moon, Age of Extinction, and The Last Knight, as well as the video games based on them. Cullen will also voice Optimus in the spin-off Bumblebee film, set to be released in 2018. He is contractually obligated to voice Optimus in at least one more sequel.

In the 1980s and the 1990s, Cullen appeared on a number of television shows. He has played Coran, Stride the Tiger Fighter, and King Alfor in the Lion Voltron series, the transforming spaceship/robot Ramrod in the 1980s anime series Saber Rider and the Star Sheriffs, Commander James Hawkins in the Vehicle Voltron series, Eeyore in the Winnie the Pooh franchise, KARR in Knight Rider, Antor and Bomba, and Gunner, in Dino-Riders, Airbourne, Nemesis Enforcer and Zandar in G.I. Joe, He played Mantor/Mantys in Coleco's 5 episode mini-series Sectaurs in 1986; Red Skull in the 1981 cartoon series of Spider-Man, Klaar and Zanzoar in Megas XLR and Mantus in The Pirates of Dark Water. He also had a voice part in the 1984 motion picture Gremlins, as a gremlin, and the first season of the 2008 Knight Rider series as KARR. He also did voicework in The Greatest Adventure: Stories from the Bible series, notably as Japheth, one of Noah's sons in the "Noah's Ark" episode, and the King of Nineveh in the "Jonah" episode. He was well known by some as the main villain Venger in the animated series of Dungeons and Dragons. He played the evil sorcerer Renwick in the lesser known series Little Wizards and played Cindarr in the short-lived series Visionaries: Knights of the Magical Light.

Among many other television series and films, he has also lent his basso voice to many film trailers and television commercials, including announcing for the Toonami and You Are Here blocks on the Cartoon Network. Cullen spent some of his early professional years in Montreal as a radio announcer/DJ on CKGM; and as a character in a then-popular local television kids show. He acted the role of a French-Canadian astronaut, along with writer and his partner on the show, Ted Ziegler. Both Ziegler and Cullen were in the supporting cast of The Sonny & Cher Comedy Hour, as well as other network comedies of the era.

He voiced Nintendo's mascot Mario in the Donkey Kong segments on Saturday Supercade, making him the first person to ever provide a voice for the character.

Cullen has done voicework on drum and bass DJ Dieselboy's 2004 album, The Dungeonmaster's Guide, and narration on the 2013 album Tetragrammaton by the Dutch extreme metal band The Monolith Deathcult. Tetragrammaton also featured Cullen on bass in "God's Among Insects." Additionally, he did voicework for the unreleased Blizzard Entertainment game Warcraft Adventures: Lord of the Clans, and provided narration for the Star Wars fan film series I.M.P.S.: The Relentless.

Cullen is a voice announcer on Police Story 4: First Strike in advertisements for New Line Cinema, lending his experience as an ex-cop for the Santa Monica division to the cast.