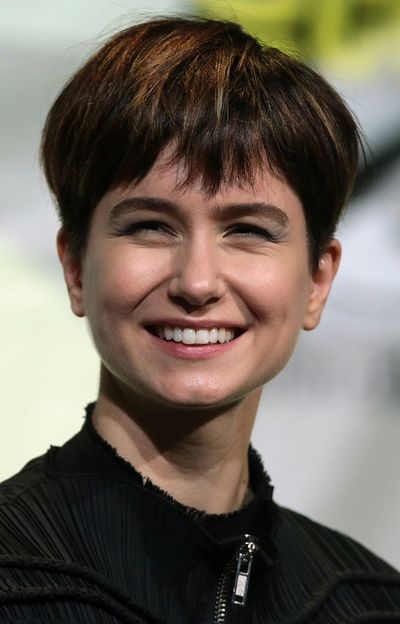 Katherine Boyer Waterston (born March 3, 1980) is an American actress. Waterston made her feature film debut in Michael Clayton (2007). She then had supporting roles in films including Robot & Frank (2012), Being Flynn (2012) and The Disappearance of Eleanor Rigby: Her (2013) before her leading role as Shasta Fay Hepworth in Paul Thomas Anderson's Inherent Vice (2014). In 2015, she portrayed Chrisann Brennan in Steve Jobs. She will star in the 2016 film adaptation of J.K. Rowling's book, Fantastic Beasts and Where to Find Them. Waterston will also have a leading role in Alien: Covenant, a prequel of Ridley Scott's Alien film series.

Waterston is the daughter of Lynn Louisa (née Woodruff), a former model, and Sam Waterston, an Oscar-nominated actor. She was born in Westminster, London, England, where her American parents were working at the time. She is a sister of actress Elisabeth Waterston and director Graham Waterston. She also has a half-brother, James Waterston, who is also an actor. She earned her B.F.A. in Acting from Tisch School of the Arts at New York University.

Also in 2011, she performed in Dreams of Flying, Dreams of Falling, also by Adam Rapp at the Classic Stage Company.

Katherine Waterston plays the role of Tina Goldstein in Fantastic Beasts: The Secrets of Dumbledore.