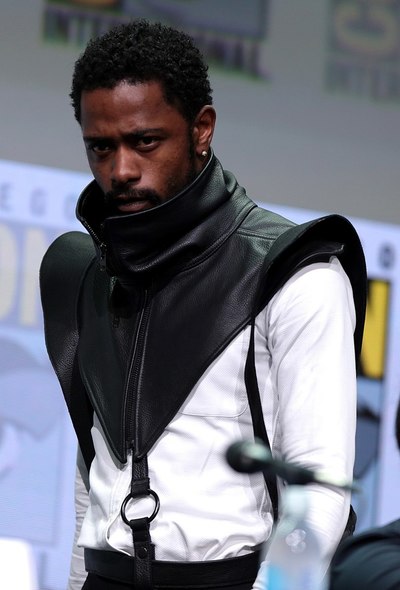 Stanfield made his feature film debut in the 2013 independent drama Short Term 12, for which he was nominated for an Independent Spirit Award. He received further recognition for his appearances in numerous biographical films, including as civil rights activist Jimmie Lee Jackson in Selma (2014), Snoop Dogg in Straight Outta Compton (2015), and Patrick Haynes in Snowden (2016).

Since 2016, he has starred as Darius Epps in the FX comedy-drama series Atlanta.

Stanfield was born in San Bernardino, California, and grew up in Riverside and Victorville, California. He has said that he "grew up very poor in a fractured family that was dysfunctional on both sides". He decided to become an actor when he was 14 years old, when he joined his high school's drama club. He attended the John Casablancas Modeling and Career Center in Los Angeles, where he was signed by an agency manager and began to audition for commercials.

Stanfield is a poet and rap artist. He is a member of a band named Moors.

Stanfield's first role was in the short film Short Term 12 (2009), which was filmmaker Destin Daniel Cretton's thesis project at San Diego State University, and won the Jury Award for U.S. Short Filmmaking at the 2009 Sundance Film Festival. A year later, he appeared in the short film Gimme Grace (2010), before he gave up acting for several years. He went on to work a number of different jobs—roof work, gardening, at AT&T, and at a legal marijuana dispensary—before he was contacted by Cretton to reappear in a feature-length adaptation of Short Term 12, his first feature film. For the duration of the film's production, Stanfield practiced method acting, distancing himself from the other cast members like his character, Marcus. He was the only actor to appear in both the short and feature films.

Short Term 12 won the Grand Jury Prize for Best Narrative Feature at the 2013 South by Southwest film festival, and Stanfield was nominated for the Independent Spirit Award for Best Supporting Male.

In 2014, Stanfield co-starred in The Purge: Anarchy and Selma, in the latter playing civil rights activist Jimmie Lee Jackson. He appeared in James Franco's upcoming film Memoria and in Don Cheadle's Miles Ahead. Stanfield also starred in the fantasy horror thriller film King Ripple, by the Michigan filmmaker Luke Jaden, and the music video for the Run the Jewels song "Close Your Eyes (And Count to Fuck)". In 2015, he portrayed rapper Snoop Dogg in the biopic Straight Outta Compton. In 2017, he acted in the Netflix-distributed production of Adam Wingard's adaptation of the popular Japanese fantasy-thriller manga series: Death Note, as an enigmatic and highly skilled yet eccentric FBI profiler "L", who hunts down "Kira", a seemingly god-like mass-murderer who is massacring numerous high-profile criminals around the world through apparent supernatural means. Also in 2017, he starred in the music video for the song Cold Little Heart, by the English singer Michael Kiwanuka, and appeared in the critically acclaimed horror film Get Out. In the same year, Stanfield was cast in the science-fiction comedy film Sorry to Bother You. The film was released July 6, 2018, to critical acclaim.

Stanfield has been in a relationship with actress Xosha Roquemore since at least August 2015 and in March 2017 the couple announced they were expecting their first child together; the baby was born later that June.