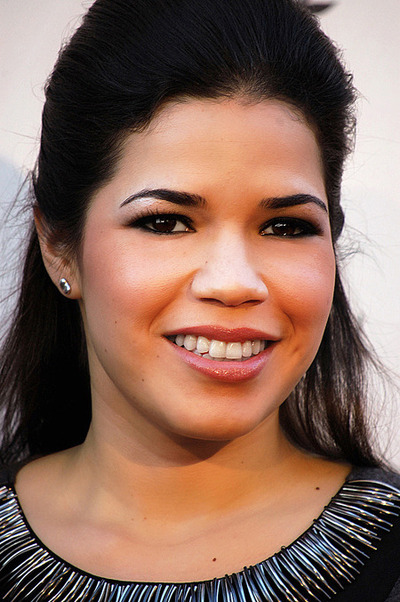 Georgine America Ferrera (born April 18, 1984) is an American actress. She is best known for her leading role as Betty Suarez on the ABC television series Ugly Betty (2006–2010). Her portrayal garnered critical acclaim, and she won the Golden Globe Award for Best Actress – Television Series Musical or Comedy, the Screen Actors Guild Award for Outstanding Performance by a Female Actor in a Comedy Series, and the Primetime Emmy Award for Outstanding Lead Actress in a Comedy Series.

She has starred in a number of films, including Real Women Have Curves (2002), The Sisterhood of the Traveling Pants (2005), its sequel Sisterhood of the Traveling Pants 2 (2008), The Dry Land (2010), End of Watch (2012), and Our Family Wedding (2010). She also had a small role in the skateboard biopic Lords of Dogtown (2005). In addition, Ferrara provides the voice of Astrid the Viking in the DreamWorks animated picture How to Train Your Dragon (2010), Cartoon Network's television series based on movie, Dragons: Riders of Berk, and the upcoming sequel, How to Train Your Dragon 2 (2014).

Ferrera, the youngest of six children, was born in Los Angeles, California. Her parents, América Griselda Ayes and Carlos Gregorio Ferrera, were originally from Tegucigalpa, Honduras, and immigrated to the United States in the mid 1970s. Her mother worked as the director of the housecleaning staff for Hilton Hotels, and stressed the importance of higher education. When she was 7, her parents divorced and her father returned to Honduras. Ferrera's father died in 2010.

Ferrera was raised in the Woodland Hills section of Los Angeles, where she attended Calabash Street Elementary School, George Ellery Hale Middle School and El Camino Real High School. From the time she was seven years old, when she landed a small role in a school production of Hamlet and then at age 10, the role as the Artful Dodger in Oliver!, Ferrera knew that she wanted to be a performer. Her first play was Romeo and Juliet, and although only in the third grade, she went to the junior high school and auditioned and got the role of the Apothecary. She acted in school plays and community theater in Los Angeles throughout her youth, though with little help from her mother, who insisted that she pursue other interests because she was concerned her daughter would not be treated fairly. Ferrera was forced to take the bus to auditions, though eventually her mother saw her daughter’s dedication and began to drive her.[6] Ferrera disliked her first name as a child and went by her middle name, "Georgina", until she began acting professionally.

While at El Camino High School, she took acting lessons at the age of 15 and was able to pay for them by waiting tables and babysitting. She graduated with a 4.3 GPA and was named class valedictorian. She entered the University of Southern California on a presidential scholarship, with a double major in theater and international relations. She dropped out of school one semester short of graduating due to her wanting to focus on Ugly Betty.

In July 2002, Ferrera made her first TV movie, Gotta Kick It Up! for The Disney Channel. While at a theatre program at Northwestern University that same year, she made her feature film debut in the indie sleeper hit Real Women Have Curves. Ferrera followed this with roles in television (Touched by an Angel).

In 2006, she landed the lead role of Betty in Ugly Betty. Ugly Betty is an adaptation of the Colombian hit telenovela Yo soy Betty, la fea, in which Ferrera portrays a girl whom her peers find extremely unattractive, thus the series title. As Betty Suarez, Ferrera wears braces, has bushy eyebrows and a disheveled wig, and make-up and clothing intended to downplay her own looks, in contrast to most of the "glammed up" characters; Ferrera herself coined the term “Bettification” to describe the process of creating her onscreen persona. The first run of Ugly Betty was completed with the series finale on ABC-TV on Wednesday, April 14, 2010. For her role in Ugly Betty, Ferrera won the 2007 Golden Globe for Best Performance by an Actress in a Television Series – Comedy or Musical. As a result of the award, she was congratulated by the U.S. House of Representatives as being a role model for young Hispanics. On January 28, 2007, Ferrera won the Screen Actors Guild Award for Best Female Actor in a Comedy Series.

In 2007, TIME chose Ferrera as one of the top artists and entertainers in their "Time 100: The Most Influential People In The World" issue. In July 2007, Ferrera won Imagen Foundation's Creative Achievement Award. On September 16, 2007, Ferrera won a Primetime Emmy Award for Outstanding Lead Actress - Comedy Seriess for her Ugly Betty role, the first Latina to win in that category.

Ferrera first met actor, director, and writer Ryan Piers Williams when he cast her in a student film at the University of Southern California. The couple became engaged in June 2010, and married on June 27, 2011. In May 2013, Ferrera graduated from the University of Southern California earning a bachelor's degree in International relations, which took her ten years to complete.