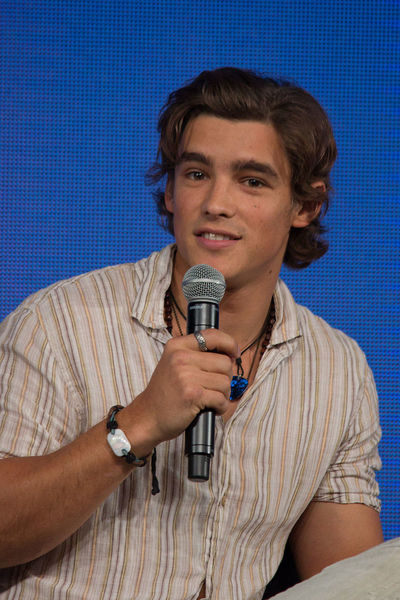 Brenton Thwaites (born 10 August 1989) is an Australian actor who first came to prominence with his portrayal of Luke Gallagher in the Fox8 teen drama series SLiDE (2011), and later Stu Henderson in the soap opera Home and Away (2011–12). Since moving to the United States, Thwaites has headlined films such as Blue Lagoon: The Awakening (2012), Oculus (2013), and The Giver (2014) – the latter, opposite Jeff Bridges and Meryl Streep.

Thwaites was born on 10 August 1989 in Cairns, Queensland, to Fiona Middleton and Peter Thwaites. He has a sister, Stacey. He underwent secondary education at Cairns State High School in Far North Queensland, graduating as a senior in 2006.

During his youth, Thwaites was drawn to the idea of becoming a policeman or a firefighter, having been interested in movies involving the latter. However, his interests diverted to the processes of filmmaking and "letting [one's] personality shine through so many different characters." At the age of 16, Thwaites made his first performance in front of a live audience in a rendition of the Shakespearean tragedy Romeo and Juliet.

Thwaites studied acting at the Queensland University of Technology (QUT) for three years, before graduating in 2010. He then relocated to Sydney to join the long-running soap opera Home and Away before moving to the United States in 2011/12 to pursue his career in acting.

Thwaites cited fellow Australian actors Heath Ledger and Hugh Jackman as inspirations of his, admiring how Ledger "was a young Aussie kid [...] who was doing really well overseas" and commending Jackman as "a cool Aussie guy who works very hard and he’s a fantastic actor." He also found inspiration in comedy actors Robin Williams and Jim Carrey when practicing the American accent.

Prior to graduating from the Queensland University of Technology, Thwaites made his film debut in Charge Over You, a 2010 independent feature film. After he graduated, Thwaites went onto appear in an episode of Sea Patrol and in the short film, Headsmen.

In November 2010, Thwaites, along with Adele Perovic, Ben Schumann, Emily Robins, and Gracie Gilbert, was cast in a new Fox8 Australian teen drama series, SLiDE. The show follows five Brisbane teenagers making their way to adulthood. Thwaites believes his character, Luke Gallagher, "stands back a bit. He watches. He's struggling with family issues. He's drawn in as it was a chance to find better friends and an opportunity to be part of a group. He's a cool, accepted kid. Some friends he can love and help him mature." Thwaites made his first appearance on SLiDE in the series' premiere episode on 16 August 2011. The series ran one season.

Shortly after Thwaites moved to Sydney from Cairns in April 2011, he was given a five–month recurring role of Stu Henderson in the 24th season of Home and Away. Thwaites called the show a great learning experience and said his co-stars were easy to work with. Thwaites made his first appearance as Stu, a member of the River Boys, on 23 August 2011. Tristan Swanwick of The Courier-Mail said Thwaites was a "bit too pretty to be a bad-ass River Boy" but that some fake tattoos would balance that impression. Of his character, Thwaites said, "Stu's awesome, he has some fights, he gets the girls, it's awesome fun."

Following Thwaites' relocation to the United States, he signed on to play the male lead in the television remake of the 1980 film, The Blue Lagoon, entitled Blue Lagoon: The Awakening opposite Australian actress Indiana Evans. Filming began in February 2012 in Maui, United States and the movie aired on 16 June 2012. The film received generally positive reviews, with Zap2it praising both Thwaites and Evans' "(mostly) believable" acting.

In 2013, Thwaites starred in the psychological/supernatural horror film Oculus, as the male lead Tim Russell. Production on the film began in October 2012 in Alabama, and was completed a few weeks later. The film was first released on 5 September 2013, at the 2013 Toronto International Film Festival, and received a worldwide theatrical release on 11 April 2014. His performance as Russell was well received by Indiewire, which claimed that Twaites maintained a "credibly frightened demeanor" throughout the film.

In 2014, Thwaites briefly returned to Australia for the filming of crime thriller Son of a Gun. Primarily shot in Perth, Kalgoorlie and Melbourne, Thwaites had to audition for the part of JR "up to 10 times before landing the role." On his character, Thwaites said, "I jumped at the opportunity to audition when this came up and I found the character was a very vulnerable kid amongst strange men that are in some way an inspiration. I just thought that was interesting as a young man myself." Thwaites received critical acclaim for his portrayal of JR, with Variety contending that he "makes a suitably keen-eyed, clean-scrubbed lead, retaining a kind of porous naivete even as the character gets his blood up" and The Sydney Morning Herald praising his role as the embattled hero of the plot. The film premiered in Australia on 16 October 2014.

Thwaites appeared in Maleficent as Prince Phillip alongside Angelina Jolie and Elle Fanning. Additionally he starred in the William Eubank's science fiction thriller film The Signal as the male lead, Nic Eastman, opposite Laurence Fishburne and Olivia Cooke. The film opened at the Sundance Festival in January 2014, seven months after shooting on location in the American Southwestern desert of New Mexico. Thwaites received praise by The Plain Dealer, noting that his performance in The Signal was "as a compelling presence in the driver's seat as things get freakier and freakier around him."

He also starred in The Giver as one of the male leads, Jonas, beside Jeff Bridges and Meryl Streep. Primarily filmed in South Africa, the film was met with generally mixed to negative reviews, with The Telegraph criticising Thwaites' portrayal for "he [struggled] to give us the layered, conflicted hero this film [needed]". However, his portrayal was well received by the Huffington Post, who commended Thwaites' acting and by The Plain Dealer, which noted that the "fast-rising Thwaites...does a nice job with the lead role." He was awarded the Australians in Film "Breakthrough Award" for his role in The Giver.

Thwaites has been dating his Gold Coast-based girlfriend Chloe Pacey since 2015, and they are expecting their first child together.