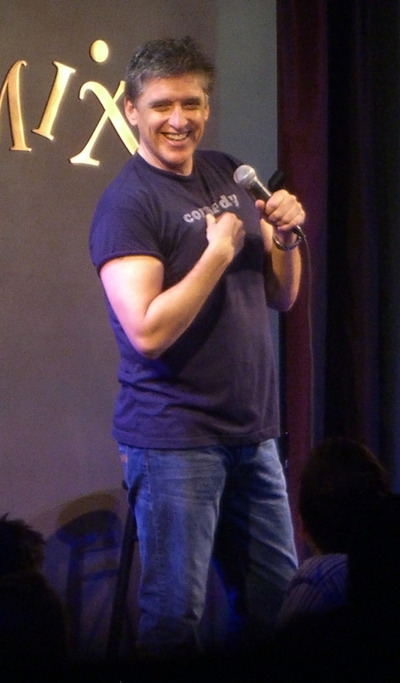 Craig Ferguson (born 17 May 1962) is a Scottish-born American television host, stand-up comedian, writer, actor, director, author, producer and voice artist. He is the host of The Late Late Show with Craig Ferguson, an Emmy Award-nominated, Peabody Award-winning late-night talk show that airs on CBS. In addition to hosting that program and performing stand-up comedy, Ferguson has written two books: Between the Bridge and the River, a novel, and American on Purpose, a memoir. He became a citizen of the United States in 2008. For several years he performed as a stand-up comedian under the stage name Bing Hitler.

Before his career as a late-night television host, Ferguson was best known in the United States for his role as the office boss on The Drew Carey Show, Nigel Wick (1996–2003). He also wrote and starred in three films, directing one of them.

Ferguson was born in Stobhill Hospital, in the Springburn district of Glasgow, Scotland, to Robert and Janet Ferguson, and raised in nearby Cumbernauld, growing up "chubby and bullied". He was raised Scottish Presbyterian. When he was six months old, he and his family moved from their Springburn apartment to a council house in Cumbernauld. They lived there as Glasgow was re-housing many people following damage to the city from World War II. Ferguson attended Muirfield Primary School and Cumbernauld High School. At age sixteen, Ferguson dropped out of Cumbernauld High School and began an apprenticeship to be an electronics technician at a local factory of American company Burroughs Corporation.

His first visit to the United States was as a teenager to visit an uncle who lived on Long Island, near New York City. When he moved to New York City in 1983, he worked in construction in Harlem. Ferguson later became a bouncer at a nightclub, Save the Robots.

Ferguson's experience in entertainment began as a drummer in a rock band called Exposure. He then joined a punk band called The Bastards from Hell. The band, later renamed "Dreamboys", and fronted by vocalist Peter Capaldi, performed regularly in Glasgow from 1980 to 1982. Ferguson credits Capaldi for inspiring him to try comedy.

After a nerve-wracking first appearance, he decided to create a character that was a "parody of all the über-patriotic native folk singers who seemed to infect every public performance in Scotland." The character, "Bing Hitler" (actually coined by Capaldi as Ferguson started under the name "Nico Fulton" but admittedly later stole the name for his "own nefarious ends"), premiered in Glasgow, and subsequently became a hit at the 1986 Edinburgh Festival Fringe. A recording of his stage act as Bing Hitler was made at Glasgow's Tron Theatre and released in the 1980s; a Bing Hitler monologue ("A Lecture for Burns Night") appears on the compilation cassette Honey at the Core.

Ferguson has married three times and divorced twice as a result of what he describes as "relationship issues". His first marriage was to Anne Hogarth from 1983 to 1986, during which time they lived in New York. From his second marriage (to Sascha Corwin, founder and proprietor of Los Angeles' SpySchool), he has one son, Milo Hamish Ferguson, born in 2001. He and Corwin share custody of Milo, and live near each other in Los Angeles. On 21 December 2008, Ferguson married art dealer Megan Wallace-Cunningham in a private ceremony on her family's farm in Chester, Vermont. Ferguson announced 14 July 2010 on Twitter that they were expecting a child. He wrote: "Holy crackers! Mrs F is pregnant. How did that happen? ... oh yeah I know how. Another Ferguson arrives in 2011. The world trembles." The child, a boy named Liam James, was born 31 January 2011.