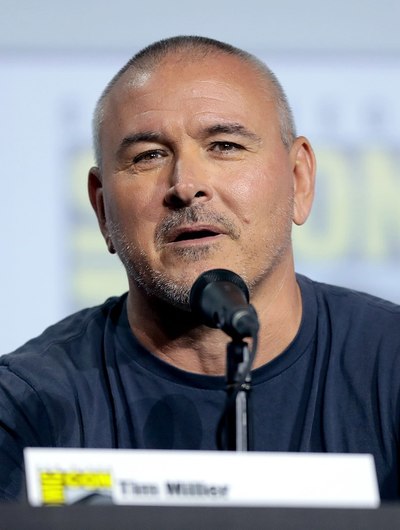 Timothy Miller (born February 28, 1970), is an American film director and visual effects artist. He made his feature-film directing debut with Deadpool (2016). He was nominated for the Academy Award for Best Animated Short Film as co-story writer and executive producer of the short animated film Gopher Broke (2004). Miller also designed the title sequences of The Girl with the Dragon Tattoo and Thor: The Dark World.

Miller was born in Fort Washington, Maryland in 1970. In March 1995, Miller co-founded Blur Studio, a visual effects, animation and design company with David Stinnett and Cat Chapman. Miller and Jeff Fowler were nominated for the Academy Award for Best Animated Short Film in 2005 for the short film Gopher Broke.

In March 2008, Miller was set to produce and direct one of eight animated tales, based on the Heavy Metal magazine. David Fincher and Kevin Eastman were also attached to produce and direct a story segment. Miller was set by Legendary Pictures on March 15, 2012 to direct a live-action adaptation of the Warren Ellis comic book series Gravel, from a script by Oliver Butcher and Stephen Cornwell. On November 14, 2012, Sony Pictures set Miller to direct Joe Haldeman's science fiction novella Seasons, which Sebastian Gutierrez was set to adapt and Michael De Luca to produce. Miller and Jeff Fowler are also set to direct and produce the animated film The Goon through their Blur Studio. As of 2018, none of these films have been produced.

Miller designed the title sequences of the film The Girl with the Dragon Tattoo (2011), and of the film Thor: The Dark World (2013). The latter was completed in 12 weeks and included 75 shots, most of which were computer-generated.

On April 8, 2011, Miller was hired by 20th Century Fox to direct the feature film Deadpool, based on the Marvel Comics character of the same name. It was his directorial debut, and was written by Rhett Reese and Paul Wernick, with Ryan Reynolds starring in the title role. Filming began late March 2015 in Vancouver, and the film was released on February 12, 2016. Miller was set to direct the sequel, Deadpool 2, released in 2018, but he departed the project due to creative differences with star Reynolds. In October 2016, he was hired to serve as executive producer for Sony Pictures' planned Sonic the Hedgehog feature film.

In mid-2017, Miller was hired to direct an adaptation of William Gibson's 1984 science-fiction novel Neuromancer for Fox, which will be produced by Simon Kinberg.