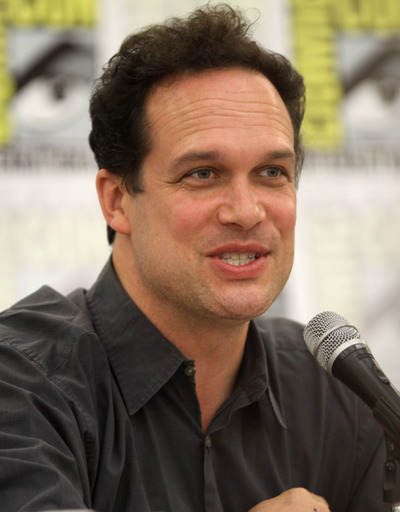 Karl Diedrich Bader (born December 24, 1966) is an American actor, voice actor and comedian known for his roles in Napoleon Dynamite, The Drew Carey Show and Outsourced. He has also performed the voice over work of Batman on Batman: The Brave and the Bold, android Zeta in The Zeta Project, Warp Darkmatter in Buzz Lightyear of Star Command, the Fiskerton Phantom in The Secret Saturdays, and his recurring role as Hoss Delgado in The Grim Adventures of Billy and Mandy.

Bader was born Karl Diedrich Bader in Alexandria, Virginia, on Christmas Eve, 1966, the son of German-born Gretta Bader, a sculptor, and William B. Bader, a foundation executive who worked in politics. His paternal great-grandfather was German American politician Edward L. Bader, former mayor of Atlantic City, New Jersey. When Bader was two years old, his family moved to Paris, France, but he returned to the U.S. to attend Groveton High School. He graduated from T.C. Williams High School in Alexandria, Virginia, and attended college at the North Carolina School of the Arts.

After a few guest roles on popular television series such as The Fresh Prince of Bel-Air, Star Trek: The Next Generation, Quantum Leap, Diagnosis: Murder and Cheers, Bader's first major role was in the 1993 series Danger Theatre, playing The Searcher. He moved into cinema acting for the 1993 film version of The Beverly Hillbillies, but returned to TV, playing Oswald on The Drew Carey Show starting in 1995.

Bader has had roles in animated features and TV series such as Ice Age, The Simpsons, Buzz Lightyear of Star Command, The Grim Adventures of Billy and Mandy and The Penguins of Madagascar. He appeared in the 1999 film Office Space as Peter's mulleted neighbor Lawrence, and in the 2004 film Napoleon Dynamite as Rex, the owner of a Taekwondo dojang. He performs in the 2004 film Eurotrip as a thief. In 2010, Bader took the role of Charlie on the television series Outsourced. In 2012, he reprised his role as Rex in the animated TV series Napoleon Dynamite. He played the Russian Cosmonaut 'Yuri' in Disney's "Space Buddies". Bader has lent his voice to several different Batman cartoons, portraying both heroes and villains: Batman Beyond, The Zeta Project, The Batman, and starring as the title character in Batman: The Brave and the Bold. Bader also voices Guy Gardner in Green Lantern: The Animated Series.

Bader is married to actress Dulcy Rogers with whom he has two children.