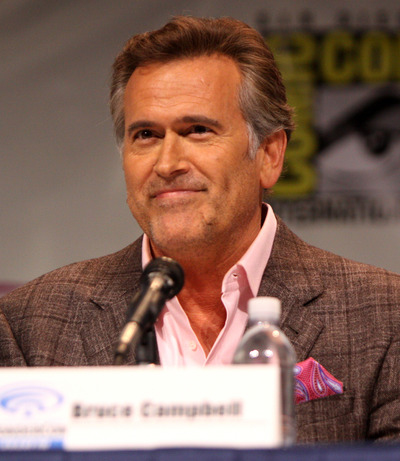 Bruce Lorne Campbell (born June 22, 1958) is an American film and television actor, director, writer, producer and author. As a cult film actor, Campbell is best known for his role as Ash Williams in Sam Raimi's hit Evil Dead series of films and he has starred in many low-budget cult films such as Crimewave, Maniac Cop, Bubba Ho-tep, Escape From L.A. and Sundown: The Vampire in Retreat. He would later spoof his B-movie career in My Name Is Bruce, in which he starred and directed. He has since made voice appearances in animated films, including Cloudy with a Chance of Meatballs and Cars 2.

In television, Campbell is known for his lead roles in both The Adventures of Brisco County, Jr. and Jack of all Trades, his portrayal of Autolycus (the King of Thieves) in Hercules: The Legendary Journeys and Xena: Warrior Princess, and notably for his role as Sam Axe on the USA Network series Burn Notice.

Campbell was born in Royal Oak, Michigan, the son of Joanne Louise (née Pickens), a homemaker, and Charles Newton Campbell, an amateur actor and traveling billboard inspector. He has an older brother, Don, and an older half-brother, Michael Rendine.

Campbell's first wife was Christine Deveau, whom he married in 1983. They had two children, Rebecca and Andy, before their divorce in 1989. Campbell currently lives in Jacksonville, Oregon, with his second wife, costume designer Ida Gearon, whom he met on the set of the movie Mindwarp.

Bruce Campbell began acting as a teenager and soon began making short Super 8 movies with friends. After meeting Sam Raimi in Wylie E. Groves High School, the two became very good friends and started making movies together. Campbell would go on to attend Western Michigan University while he continued to work on his acting career. Campbell and Raimi collaborated on a 30-minute Super 8 version of the first Evil Dead film, titled Within the Woods, which was initially used to attract investors.

A few years later, Campbell and Raimi got together with family and friends and began work on The Evil Dead. Campbell starred and worked behind the camera, receiving a "co-executive producer" credit. Raimi wrote, directed and edited, while fellow Michigander Rob Tapert was producer. Following an endorsement by horror writer Stephen King, the film slowly began to receive distribution. Four years following its original release, it became the number one movie in the UK. It then received distribution in the U.S., spawning two sequels: Evil Dead II and Army of Darkness. Campbell's role as Ashley J. "Ash" Williams has since become iconic. The first two films in the series are considered horror classics and are credited with spawning the "horror comedy" genre.

Campbell is an ordained minister, and has married couples.