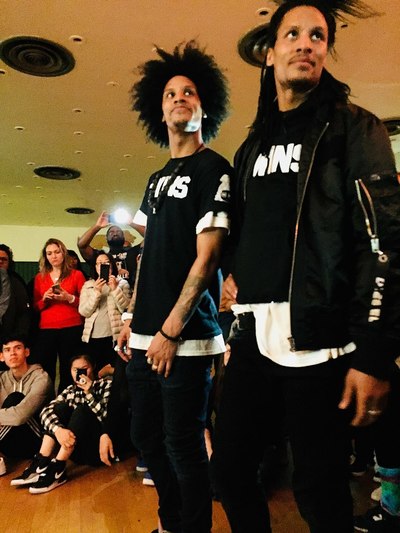 Laurent and Larry Nicolas Bourgeois (born December 6, 1988), professionally known as Les Twins, are French dancers, choreographers, producers, models, designers, and creative directors of their brand "Eleven Paris". Often referred to by their respective nicknames, "Lil Beast" and "Ca Blaze", they are recognized internationally for their talents in new style hip-hop dancing, and various dancing styles. They are identical twin brothers.

Born and raised in Sarcelles, France, the self-taught dance duo became the darlings of the French audience in 2008 as finalists on the popular television show Incroyable Talent. They quickly rose to prominence in the United States after a video of their performance on the San Diego leg of the 2010 World of Dance tour went viral on YouTube, with over 37 million views as of 5 July 2017. In 2011, they won the hip-hop new style division of the prestigious international street dance competition Juste Debout. In 2017, they won the American reality competition series World of Dance, executively produced by Jennifer Lopez. The series featured solo acts and larger groups, competing for a grand prize of US $1 million.

Les Twins have been featured dancers for various music artists, including Beyoncé, Meghan Trainor, and Missy Elliott. Standing at 6'4" (193 cm) tall, the brothers have modeled for French haute couture fashion designer Jean Paul Gaultier and appeared in many high-profile, commercial advertising campaigns, such as YSL, Chanel, Gucci, Prada, Versace, Jay-Z's Rocawear, Givenchy, and Beats by Dre. They have also walked for many shows before becoming celebrities. They also signed with The Jordan Family.

The twins were born on December 6, 1988 in Sarcelles, a commune in the northern ghetto of Paris, France. They are the youngest in a large, Guadeloupean extended family of 9 children.

Neither Larry nor Laurent received any formal dance training. Instead, they learned by observing other breakers, lockers, and poppers and by teaching themselves classical ballet techniques. At the age of 12, they began performing in concerts and musicals. According to WAD Magazine, "They were born dancers. They walked at 5 months, seriously moved their bodies at 18 months old, and at 9 they showed off steps they had invented to youngsters twice their age in their neighborhood."

In 2005, the brothers recruited five members to form their own dance team called Criminalz Crew, spending the next few years competing in hip-hop tournaments and entertaining crowds as street performers and in clubs. In 2007, they danced to sold-out audiences in the musical Pas de Quartier at France’s esteemed Avignon Festival.

In March 2008 Les Twins gained the attention of the dance community by defeating French street dancers Joseph Go and Meech Onomo at the semi-finals of the prestigious international dance competition Juste Debout. Following that success, they were finalists and audience favorites on Season 3 of Incroyable Talent (the French equivalent of Britain’s Got Talent) aired on M6. On November 13, 2008 the twins were among the top twelve finalists competing on the Incroyable Talent finale show attended by Princess Stéphanie of Monaco and watched by over 4 million viewers. In 2009, they were contracted to perform the two-man hip-hop comedy stage revue Twins choreographed by their long-time coach Abibou "Playmo" Kébe at the Théâtre Trévise in Paris.

In August 2010, a video of their performance on the World of Dance tour in San Diego went viral on YouTube. On November 9, 2010 they made their U.S. television debut on The Ellen DeGeneres Show.

In March 2011 the twins won the Hip-hop New Style division at Juste Debout, beating out over 353 dancers. That same year they performed alongside Beyoncé at the 2011 Billboard Music Awards, the U.K.'s Glastonbury Festival, the BET Awards, and the Good Morning America Summer Concert Series, garnering even greater attention on the world stage. They also joined her on the French television shows X-Factor and Le Grand Journal to promote her then upcoming album 4, and were the only featured male dancers in the alternate version of her "Run the World (Girls)" music video. Their collaboration with Knowles would continue in May 2012 at the Revel Presents: Beyoncé Live concert series in Atlantic City.

Larry and Laurent were star dancers on the Michael Jackson: The Immortal World Tour by Cirque du Soleil until December 2011.

During November 2012 they guest starred on the television dance competition Everybody Dance! in Ukraine and teamed up again with Missy Elliott at the Beats on the Beach event in Abu Dhabi and the Back2Black Festival in Rio de Janeiro, Brazil.

In December 2012 the twins began working on multiple projects with Sony Japan. In 2013, they toured with Beyoncé as the only male dancers on The Mrs. Carter Show World Tour. The duo was also featured in the music video of "Blow" and "Jealous" from Beyoncé's self-titled fifth studio album.

In 2012 and 2014, Les Twins appeared in episodes of Avengers of eXtreme Illusions, the revolutionary dance series by Welling Films. After the videos came out, Les Twins put their own cut of Welling's work on their own YouTube channel.

In 2014, Les Twins joined Beyoncé and her husband Jay-Z on their On the Run Tour. In 2015, Les Twins appeared in a special freestyle dance in the song "Tattoo" in Bollywood film ABCD 2, which was directed by Remo D'Souza.

Les Twins are signed with NEXT Model Management in Paris. In 2010, they walked the runway at Paris Fashion Week for the Jean Paul Gaultier Fall 2010 Men’s Collection.

Larry and Laurent have traveled the globe teaching their original choreography in countries including France, the U.S, Japan, Canada, Russia, Germany, Italy, Finland, Ukraine, Poland, Hungary, the Czech Republic, and Kyrgyzstan. Crowds of up to 5000 people have been in attendance at some of their international dance workshops.

In 2010, they choreographed the dance sequence to the song Jump by Kris Kross in the Wii video game Just Dance 2.

In June 2011, Fox broadcast a portion of the audition piece of contestants D*Day (Damon Bellmon and Deon Lewis) on Season 8 of the dance competition So You Think You Can Dance. Although they were accused by many of plagiarizing their choreography from Les Twins' World of Dance San Diego performance on YouTube, D*Day was allowed to proceed to the next stage of the competition. In 2012, Bellman and Lewis returned on the SYTYCD Season 9 Atlanta auditions show claiming (with archived footage from the Show) their prior year’s routine was a homage to Les Twins’ work.

Les Twins’ dance style is often categorized as New Style hip-hop, a commercial form of hip hop with a strong emphasis on isolations and musicality. However, the twins are known for having created a unique style from this dance which they refer to as "Twins-Style". Due to their ability to anticipate and finish each other’s moves, the brothers quickly gained a reputation for their timing and skill at making freestyle dance look like choreography. Charlotte Guillemin of WAD Magazine wrote:

They have really created a form of hip-hop that is truly individual to them...They are in perfect symbiosis. They look totally disjointed with their very jerky movements, although at the same time displaying an amazing fluidity. They undulate, bend and twist, impossible to assess where their center of gravity lies: both phenomenal and unreal.

Larry and Laurent credit their major inspirations as Michael Jackson, their coach Abibou "Playmo" Kébe, cartoons, and their own siblings, nine of whom are also dancers.

Les Twins are immediately recognizable for their large afros and trademark style of dress—backwards pants, neck warmers, and kneepads worn around the ankles. Regarding their tendency to adopt other unique accessories, such as beaded bracelets and necklaces, wristbands, watch chains, scarves, and ladies’ wear, Laurent stated: "We have changed consciousness about fashion."