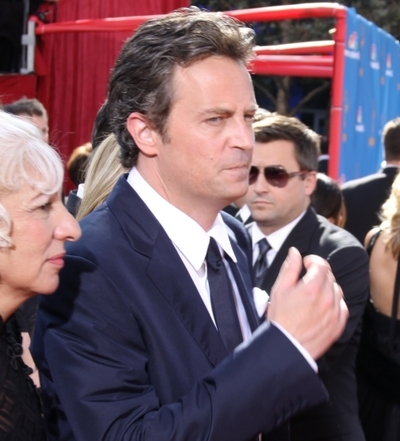 He is well known for his Emmy-nominated role as Chandler Bing on the popular, long-running NBC television sitcom Friends. He also received acclaim for his portrayal of Ron Clark in the television movie The Ron Clark Story, accompanied by another Emmy nomination as well as a Golden Globe nomination. Perry also starred in the short-lived series Studio 60 on the Sunset Strip and has appeared in a number of films, including Fools Rush In (1997), The Whole Nine Yards (2000), and 17 Again (2009). In 2010 he expanded his resume to include both video games and voiceover work when he voiced Benny in the role-playing game Fallout: New Vegas. Perry was the co-creator, co-writer, executive producer and star of the short-lived ABC sitcom Mr. Sunshine, which ran from February to April 2011.

Perry was born in Williamstown, Massachusetts. His mother, Suzanne Marie (née Langford), is a Canadian journalist and former press secretary to Canadian Prime Minister Pierre Trudeau, and his father, John Bennett Perry, is an American actor and former model. His parents divorced before his first birthday and his mother subsequently married Keith Morrison, a broadcast journalist. Perry was raised by his mother in Ottawa, Ontario, and was enrolled at Rockcliffe Park Public School and Ashbury College. While growing up, he took a keen interest in tennis and became a top-ranked junior player.

Matthew Perry moved from Ottawa to Los Angeles to pursue acting. For high school, he attended The Buckley School in Sherman Oaks. While at Buckley, Perry was featured as George Gibbs in Our Town and appeared as a junior in a production of The Miracle Worker. Patty Duke attended and praised the young Perry's convincing role as Helen's brother Jimmy. He was also featured in The Sound of Music as a junior. In his senior year, director Tim Hillman had planned a production of "The Elephant Man" specifically to feature Perry as John Merrick along with Vanessa Smith, and future Les Misérables star Lisa Capps. He then got his professional break at age 18. On being cast in A Night in the Life of Jimmy Reardon with River Phoenix, Perry withdrew from Elephant Man and ended his high school acting career. Perry also pursued improv comedy at the LA Connection in Sherman Oaks while still in high school, quickly becoming a featured performer.

After some guest appearances in late 1980s television, it was his intention to enroll at the University of Southern California, but when he was offered the lead role of Chazz Russell in Second Chance he became noticed on the acting scene. Perry originally starred alongside Kiel Martin when the series premiered in 1987, but after 13 episodes the format changed: Second Chance became Boys Will Be Boys, Perry was elevated to top-billing status, and the plots re-focused on the adventures of Chazz and his teenage friends. Despite the shift, the show ran for only one season. When it concluded, Perry stayed in Los Angeles and made guest appearance on the television program Growing Pains in which he portrayed Carol's boyfriend who dies from injuries in the hospital sustained in a drunk driving accident.

In the midst of his many continuing guest roles on TV, Perry was cast as a regular on the 1990 CBS sitcom Sydney, playing the younger brother of Valerie Bertinelli's title character. In 1991, he made a guest appearance on Beverly Hills, 90210 as Roger Azarian. Perry landed his next TV starring role on the ABC sitcom Home Free, which aired only 11 episodes in the spring 1993. By then, Perry was making his mark, and was instantly cast in a new dramatic pilot titled LAX 2194. The project was slow to take off, so as a backup option, he attempted to secure an audition for the pilot Six of One, later to be known as Friends, by Marta Kauffman and David Crane, both of whom he had worked with on Dream On. However, due to previous commitments to the pilot LAX 2194, he was not initially considered for an audition. When he did eventually get a reading, he landed the part he is best known for, the role of Chandler Bing.

The program was hugely successful and Perry, along with his co-stars, gained wide renown among television viewers. The program also earned him Emmy nominations in 2002 for Outstanding Lead Actor in a Comedy Series along with Matt LeBlanc, but he lost to Ray Romano. As well as his successful career on Friends, Perry has appeared in films such as Fools Rush In (alongside fatherJohn Bennett Perry and Salma Hayek), Almost Heroes, Three to Tango, The Whole Nine Yards (alongside Bruce Willis) and its sequel The Whole Ten Yards, and Serving Sara.

Perry reportedly dated Julia Roberts, Yasmine Bleeth and Lauren Graham. He has been in a relationship with Lizzy Caplan since 2006.