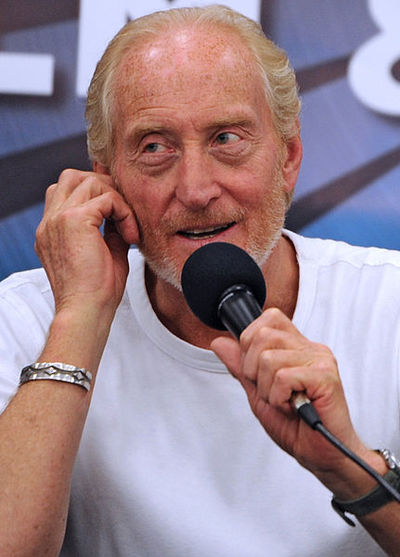 Walter Charles Dance, OBE (born 10 October 1946) is an English actor, screenwriter, and film director. Dance typically plays assertive bureaucrats or villains. Some of his most high-profile roles are Guy Perron in The Jewel in the Crown (1984), Dr. Jonathan Clemens in Alien 3 (1992), Sardo Numspa in The Golden Child (1986), the Master Vampire in Dracula Untold (2014), Benedict in Last Action Hero (1993), Alastair Denniston in The Imitation Game (2014), and Tywin Lannister in HBO's Game of Thrones.

Dance was born in Redditch, Worcestershire, the son of Eleanor (née Perks), a cook, and Walter Dance, an engineer. Growing up in Plymouth, he attended Widey Technical School for Boys (it closed when known as Widey High School in 1988) in Crownhill. He was set for a career in graphic design after graduating from De Montfort University before turning to acting.

Dance was a member of the Royal Shakespeare Company during the mid- to late-1970s and was in many of their productions in London and Stratford-upon-Avon. Later he returned to the RSC to take the title role in Coriolanus at Stratford-upon-Avon and Newcastle in 1989, and at the Barbican Theatre in 1990. He received rave reviews and a Critics' Circle Best Actor award for his performance as the Oxford don C. S. Lewis in William Nicholson's Shadowlands, in the 2007 stage revival.

Dance made his screen debut in 1974, in a BBC mystery series Father Brown as Commandant Neil O'Brien in "The Secret Garden", but his big break came ten years later when he played the major role of Guy Perron in The Jewel in the Crown (Granada Television, Christopher Morahan 1984), an adaptation of Paul Scott's novels that also made stars of Geraldine James and Art Malik. He has also starred in many other British television dramas such as Murder Rooms, Randall & Hopkirk (Deceased), Rebecca, The Phantom of the Opera, Fingersmith and Bleak House (for which he received an Emmy nomination). He was name-checked in the British comedy series Absolutely Fabulous, as being slated to play the title character in The Life of Jesus Christ 2, which was filming in Morocco at the same time as the main characters of the series were there for a photo shoot. He also played Guy Spencer, the pro-Hitler propagandist, in the second installment of Foyle's War, and had an ongoing role as Dr. Maltravers in the ITV drama Trinity.

Dance's debut film as a writer and director was Ladies in Lavender (2004), which starred Judi Dench and Maggie Smith. In 2009, he directed his own adaptation of Alice Thomas Ellis's The Inn at the Edge of the World.

Dance married Joanna Haythorn in 1970. They had two children. After his marriage ended in 2004, he had a brief relationship with actress Sophia Myles who was 34 years his junior. Dance was appointed an Officer of the Order of the British Empire (OBE) on 17 June 2006. He became engaged to sculptor Eleanor Boorman in September 2010. They had a daughter, Rose, in March 2012, though the two subsequently separated.