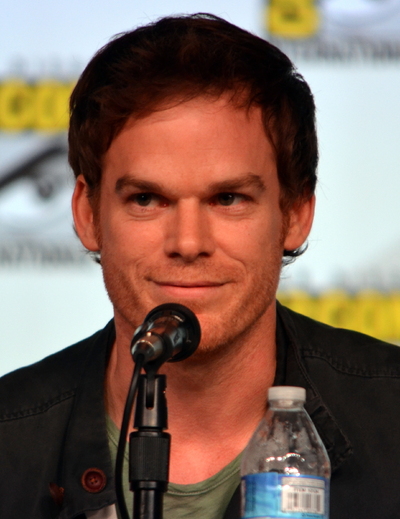 Michael Carlyle Hall (born February 1, 1971) is an American actor whose television roles include David Fisher on the HBO drama series Six Feet Under and Dexter Morgan on the Showtime series Dexter. In 2009, Hall won a Golden Globe award and a Screen Actors Guild Award for his role in Dexter.

Hall was born in Raleigh, North Carolina. His mother, Janice Styons Hall, is a College guidance counselor at Lees-McRae College, and his father, William Carlyle Hall, worked for IBM. Hall grew up an only child, a sister having died in infancy before his birth. He has said of growing up a single child, that "There was a very one-on-one, immediate family relationship, my mom and I." His father died of prostate cancer in 1982, when Hall was 11 years old.

Hall attended Ravenscroft School in Raleigh, graduating in 1989. He graduated from Earlham College in 1993 and had planned to become a lawyer. He later attended New York University's Graduate Acting Program at the Tisch School of the Arts, graduating in 1996.

Early on in life Hall discovered acting, performing in “What Love Is” while in the second grade at Ravenscroft School. When he was in fifth grade, he began singing in a boy's choir, then graduated to musicals in high school, performing in standards such as The Sound of Music, Oklahoma! and Fiddler on the Roof.

Hall's acting career began in the theater. Off-Broadway, he appeared in Macbeth and Cymbeline at the New York Shakespeare Festival, and in Timon of Athens and Henry V at The Public Theater, The English Teachers at the Manhattan Class Company (MCC), and the controversial play Corpus Christi at the Manhattan Theatre Club.

On May 1, 2003, Hall married actress Amy Spanger; he played Billy Flynn opposite her Roxie Hart in the Broadway musical Chicago the summer after their wedding. The couple separated in 2005 and filed for divorce in 2006.

On December 31, 2008, he eloped with Jennifer Carpenter, who plays the character of Dexter Morgan's adoptive sister, Debra Morgan, on Showtime's Dexter. They dated for a year prior to getting married. In December 2010, Hall and Carpenter released a statement announcing that they had filed for divorce after having been separated "for some time". The divorce was finalized in December 2011. Since May 2012, Hall has been in a relationship with novelist Morgan Macgregor.