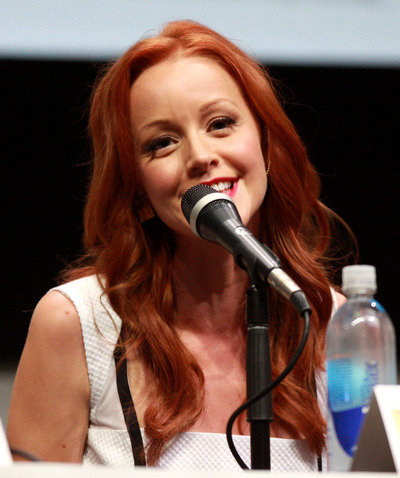 Lindy Booth (born April 2, 1979) is a Canadian actress who resides in Los Angeles, California. She's best known for playing Riley Grant on the Disney Channel series The Famous Jett Jackson (and Agent Hawk in the show-within-a-show Silverstone) and Claudia on Relic Hunter. She also portrayed A.J. Butterfield on the NBC series The Philanthropist.

Other credits include guest starring as different characters in two 2002 episodes of the A&E Network series A Nero Wolfe Mystery ("Before I Die" and "Poison a la Carte"), and a recurring role in season two of the USA Network series The 4400. She also starred as Dodger Allen in the 2005 movie Cry_Wolf, as Nicole in the 2004 remake of Dawn of the Dead, and had a small part inWrong Turn with Eliza Dushku. She appears in Dark Honeymoon. In addition, she has guest starred in TV shows such as CSI: NY and Ghost Whisperer. She also played Stephanie Goodison on Syfy's Warehouse 13 and portrayed Lana Turner in 2001's Life with Judy Garland: Me and My Shadows. In August 2012, she joined the cast of Kick-Ass 2.

Booth was born in Oakville, Ontario and attended T. A. Blakelock High School, graduating in 1998 prior to beginning her film career.