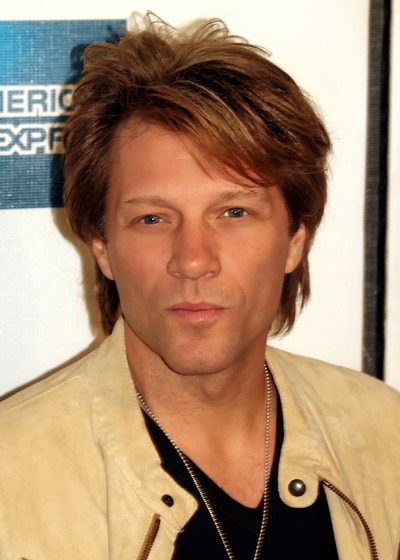 During his career, he has released two solo albums and eleven studio albums with his band, which to date have sold over 130 million albums worldwide making them one of the world's best-selling music artists. Besides his music career, Jon Bon Jovi started an acting career in the 1990s, starring roles in several movies include Moonlight and Valentino and U-571 and also made appearances on TV series including Sex and the City and Ally McBeal.

As a songwriter, Jon Bon Jovi was inducted into Songwriters Hall of Fame in 2009. In 2012, Jon Bon Jovi ranked number fifty on the list of Billboard magazine's "Power 100", a ranking of "The Most Powerful and Influential People In The Music Business". In 1996, People magazine named him as one of the "50 Most Beautiful People In The World". In 2000, the same magazine named him as the "Sexiest Rock Star" and he was also placed at number thirteen on VH1's "100 Sexiest Artists ".

Jon Bon Jovi was born John Francis Bongiovi, Jr. in Perth Amboy, New Jersey, the son of two former Marines, barber John Francis Bongiovi, Sr. and Playboy Bunny turned florist Carol Sharkey. He has two brothers, Anthony and Matthew. His father was of Italian (from Sciacca, Sicily) and Slovak ancestry and his mother is of German and Russian descent. He has stated that he is a blood relative of singer Frank Sinatra. Bon Jovi was raised Catholic. He spent summers in Erie, Pennsylvania, with his grandparents, and sold newspapers. As a child, John attended St. Joseph High School, in Metuchen, New Jersey, during his freshman and sophomore years. He later transferred to Sayreville War Memorial High School in Parlin, New Jersey.

John spent most of his adolescence skipping school to opt for music activities instead, and ended up playing in local bands with friends and his cousin Tony Bongiovi, who owned the then famous New York recording studio, The Power Station. As a result, his academic records displayed poor grades. By the time he was 16, John Bongiovi was playing clubs. It was not long before he joined up with keyboardist David Bryan (real name: David Bryan Rashbaum), who played with him in a ten-piece rhythm and blues band called Atlantic City Expressway. John also performed with bands called The Rest, The Lechers and John Bongiovi and the Wild Ones.

When he was seventeen, Jon Bon Jovi was working sweeping floors at his cousin Tony Bongiovi's recording studio. In 1980, when Meco was there recording Christmas in the Stars: The Star Wars Christmas Album, Tony Bongiovi recommended him for the song "R2-D2 We Wish You A Merry Christmas." This became his first professional recording (credited as John Bongiovi).

During 1983 Jon Bon Jovi joined Scandal as a rhythm guitarist (briefly). He also appears during a demo recording of music video for Scandal's 1983 single "Love's Got A Line On You" which reached #59 in US.

In June 1982, Jon Bon Jovi recorded a song called "Runaway". The studio musicians who helped record "Runaway" – known as The All Star Review – were guitarist Tim Pierce, keyboardist Roy Bittan, drummer Frankie LaRocka, and bassist Hugh McDonald. He went to several record companies, including Atlantic Records and Mercury (PolyGram), but they all turned him down. Jon Bon Jovi visited major rock station WAPP 103.5FM "The Apple" in New York City. He spoke directly to the promotion director John Lassman, who accepted the song "Runaway" for inclusion on the station's compilation album of local homegrown talent. "Runaway" became a local hit. Along the way, Mercury Records gave Jon Bon Jovi a recording contract in 1983, and to promote "Runaway", Jon Bon Jovi called up David Bryan who in turn called bassist Alec John Such, drummer Tico Torres. Tapped to play lead guitar was Jon Bon Jovi's neighbor, Dave Sabo who later formed the group Skid Row. Sabo was eventually replaced by Richie Sambora. After Jon Bon Jovi claimed he wanted a group name, a friend of Richard Fischer and an employee of Doc McGhee, suggested they call themselves Bon Jovi, following the example of the other famous last name bands such as Van Halen and Dokken. This name was chosen instead of the original idea of Johnny Electric. The band released their eponymous first album on January 21, 1984. The band became an international act in the late 1980s, when they released their breakthrough album Slippery When Wet. Their fourth album New Jersey, which was released in 1988, became as successful as its predecessor.