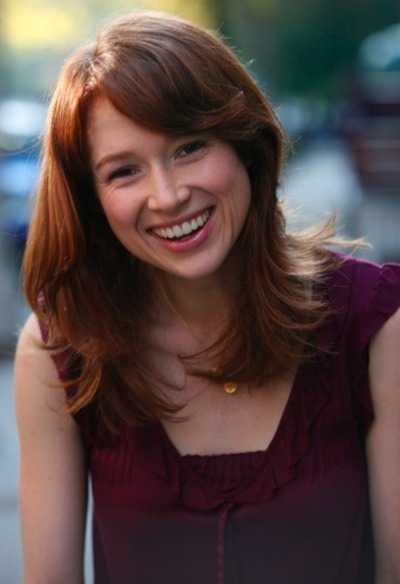 Elizabeth Claire "Ellie" Kemper (born May 2, 1980) is an American actress, comedian, and writer. She is best known for her role as Kimmy Schmidt in the Netflix comedy series Unbreakable Kimmy Schmidt, for which she has received critical acclaim. Kemper is also known for her role as Erin Hannon in the NBC series The Office, as well as her supporting roles in the films Bridesmaids and 21 Jump Street. In summer 2015, she joined NBC News as a temporary co-host on NBC's morning news program, The Today Show.

Kemper was born in Kansas City, Missouri, the second of four children of Dorothy "Dotty" Ann (Jannarone) and David Woods Kemper, one of the wealthiest families in the State of Missouri. She is the granddaughter of Mildred Lane Kemper, the namesake of the Mildred Lane Kemper Art Museum at Washington University in St. Louis, for which the family donated $5 million. Kemper's father was the chairman and chief executive officer of Commerce Bancshares, a bank holding company founded by the Kemper family (her paternal great-great-grandfather was banker William Thornton Kemper, Sr.). She is also the older sister of television writer Carrie Kemper. Kemper has Italian (from her maternal grandfather), English, and German ancestry.

The family moved to St. Louis when Kemper was five years old. She attended Conway Elementary School in the St. Louis suburb of Ladue and then high school at John Burroughs School, where she developed an interest in theater and improvisational comedy. One of her teachers was actor Jon Hamm, with whom she appeared in a school play.[3] In 1999, Kemper made her debut at the Veiled Prophet Ball, where she was named the Veiled Prophet Queen of Love and Beauty.

Kemper graduated from Princeton University in 2002 with a Bachelor of Arts in English. At Princeton, she played field hockey in the 1999 season, and said she sat on the bench "roughly 97 percent" of the time.[8] Her field hockey team went to the national championship in her first year, but she quit the team in later years to focus on theater. She then attended the University of Oxford, where she studied towards a graduate degree in English.

Kemper continued her interest in improvisational comedy while in Princeton. She participated in Quipfire!, Princeton's oldest improv comedy group, and the Princeton Triangle Club, a touring musical comedy theater troupe. She also appeared in a radio spot for Dunkin' Donuts.

Kemper earned her Screen Actors Guild card doing commercial advertising of a one-week sale of tents at Kmart. The commercial featured her camping with an onscreen husband, and a shot in which a tarantula crawls across her face. She regularly appeared in comedy sketches on Late Night with Conan O'Brien in the late 2000s, and has made guest appearances on Important Things with Demetri Martin, and E! Television's The Gastineau Girls, which has been described as her "breakout role". She has appeared on Fuse TV's The P.A. In October 2008, Kemper appeared on The Colbert Report in a PSA for Teen Voter Abstinence. Kemper has written several sketch comedy shows many of them with her comedy partner Scott Eckert, a fellow Princeton grad. Kemper is a contributing writer for the national satirical newspaper The Onion, and for McSweeney's. She is also a contributor to The Huffington Post.

Upon moving to New York City, Kemper participated in the People's Improv Theatre and the city troupe of Upright Citizens Brigade, an improvisational comedy and sketch comedy theater. She has appeared in several shows for the Brigade, including Death and/or Despair, Listen Kid, Gang Bang and The Improvised Mystery. At the UCB, she performed with the house improv teams Mailer Daemon and fwand. At the People's Improv Theatre she performs with the house improv team Big Black Car. In August 2008, she auditioned for a spot on the NBC sketch comedy show Saturday Night Live, but was not cast. In July 2009, Kemper was named one of Variety magazine's "10 Comics To Watch".

Being on set with them is like being in a dream, except the dream is real and I can reach out and touch them. Except I am trying not to touch them too much, because I was raised right.

Ellie Kemper on The Office

In 2007, she appeared in How to Kick People, a performance combining comedy and literary performances. In March 2008, she wrote and performed in the one-woman show "Dumb Girls" through the Upright Citizens Brigade Theatre. She also performed in the one-woman show "Feeling Sad/Mad with Ellie Kemper" and has appeared in comedy sketches on Funny or Die, the comedy website started by Will Ferrell and Adam McKay's production company, Gary Sanchez Productions.

Kemper gained some Internet fame in August 2007 for her part in "Blowjob Girl", a humor video on the sketch comedy site Derrick Comedy. The video, which was circulated on the popular site CollegeHumor, was a two-minute close-up of Kemper offering to perform oral sex on her boyfriend, but startling him by promising to bite and smash his genitals, which she seems to believe is arousing. Kemper said of the video in an April 2010 interview with The A.V. Club: "I really don't like that video, and I wish that I hadn't done it, even though I know that it's a joke. I hate that it got sort of big, because I don't think that it's that funny and I don't want that to be the epitome of my work. It's just one video in a sea of many, but it has made me conscious of not wanting to do a video like that again." Kemper has also contributed an article to CollegeHumor entitled "Regarding Our Decision Never to See Me Again." She also had a minor role in the 2009 film Mystery Team. Kemper starred in the fake iPhone commercial on Late Night with Conan O'Brien in January 2007, six months before the first iPhone was released. Kemper appeared in the Sofia Coppola comedy-drama Somewhere in 2010. She appeared in Bridesmaids in 2011. On April 3, 2013, it was announced that Kemper would be voicing a character in an episode of the animated sitcom American Dad!.

Kemper auditioned for a role in Parks and Recreation, an NBC comedy series started in 2009 by Michael Schur and Greg Daniels, creator of the series The Office. She was not cast in the role, but received a call back to audition for a supporting role in The Office as Erin Hannon, a secretary filling in for the regular secretary Pam Beesly when she briefly left the job at the end of the fifth season. Kemper was cast in the role, and started appearing in the show in April 2009. The character was originally written to be more sarcastic and dry, but the writers changed her to be more perky and optimistic to more closely resemble Kemper herself. Kemper described the character as "an exaggerated version of myself". Kemper described herself as a "huge fan" of the show and was thrilled to be on the show. Although the character was originally intended for four episodes, the producers were impressed with Kemper and signed her as a regular in the sixth season. Jennifer Celotta, a screenwriter with the series, described Kemper as a "fun addition" to the show.

Kemper is a Roman Catholic. In 2012, she became engaged to her boyfriend Michael Koman, a former writer on Late Night with Conan O'Brien, and the co-creator of the Adult Swim series Eagleheart and Comedy Central series Nathan for You. The couple married on July 7, 2012. In April 2016, Kemper revealed that she was pregnant with her first child. It was reported on August 2, 2016 that Ellie Kemper had given birth to a baby boy.