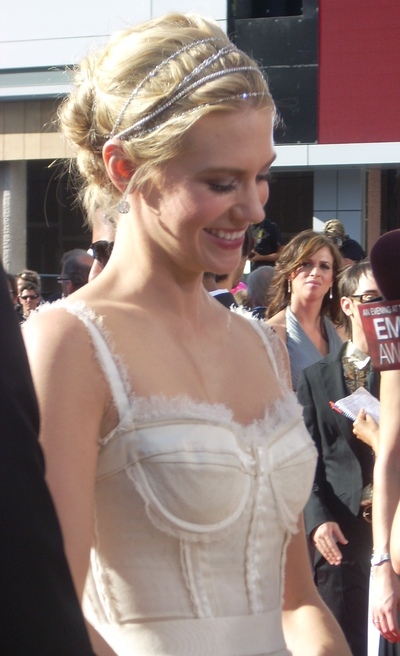 January Kristen Jones (born January 5, 1978) is an American actress and model. She is best known for playing Betty Draper in the television series Mad Men since 2007, as well as for roles as Cadence in American Wedding (2003), Elizabeth Harris in Unknown (2011), and Emma Frost in X-Men: First Class (2011).

Jones was born in Hecla, South Dakota, the daughter of Karen, who manages a sporting goods store, and Marvin Jones, a coach, gym teacher, and fitness director. She is named after January Wayne, a character in Jacqueline Susann's Once Is Not Enough. She has two sisters – Jacey and Jina.

Jones has had supporting roles in Anger Management (2003), Love Actually, and Dirty Dancing: Havana Nights. In 2005, she appeared as a U.S. border guard's frustrated wife in the film The Three Burials of Melquiades Estrada directed by and starring Tommy Lee Jones. In We Are Marshall (2006), she played the role of Carol Dawson, wife of football coach William "Red" Dawson.

She played the lead female role in the movie Love's Enduring Promise as a pioneer family's oldest child. Her character falls in love with a mysterious man who saves her father's life. She currently appears in the AMC original television drama series Mad Men as young suburban housewife and mother Betty Draper Francis. She is also known for her role as Cadence Flaherty, the love interest of both Steve Stifler and Paul Finch in the 2003 comedy film American Wedding, the third installment of the American Pie film series.

She appeared in the season 18 Law & Order episode "Quit Claim," playing a con artist who matches wits with Assistant District Attorney Michael Cutter, in which she is the lone surviving suspect connected to a real estate scam involving organized crime. She also appeared in The Boat That Rocked, a British film about offshore pirate radio in the 1960s, renamed Pirate Radio for North American release in 2009.

Jones was ranked No. 82 on the Maxim Hot 100 Women of 2002. She appeared on the cover of "The Hot Issue" of British GQ magazine in May 2009. She appeared on the cover of the November 2009 issue of American GQ magazine, and has been a 'topic' in the magazine several times. On November 14, 2009, Jones hosted an episode of Saturday Night Live which featured the musical guest The Black Eyed Peas, giving a performance that was met with negative reviews.

In 2011, she starred alongside Liam Neeson and Diane Kruger in the thriller film Unknown, directed by Jaume Collet-Serra, and portrayed Emma Frost in X-Men: First Class.

ones announced in Vanity Fair magazine in 2009 that she has joined Oceana as a celebrity spokesperson, working to save endangered sharks.

Jones gave birth to a son, Xander Dane Jones, on September 13, 2011. Jones has remained silent regarding the identity of her son's father. Following the birth, Jones ate capsules made from her dried placenta which, along with a healthy diet and vitamins, she credits with helping her get back to work.