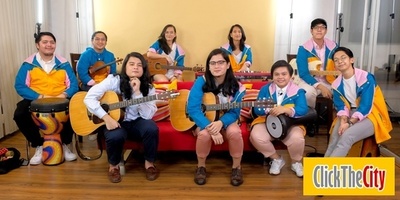 Ben&Ben (formerly known as The Benjamins) is an indie folk/folk pop band in the Philippines. They consist of the twin brothers, Paolo and Miguel Guico on acoustic guitars and vocals, Poch Barretto on electric guitar, Jam Villanueva on drums, Agnes Reoma on bass, Patricia Lasaten on keyboards, Toni Muñoz and Andrew de Pano on percussions, and Keifer Cabugao on violin. The band has been known for their popular hits such as "Ride Home", "Leaves", "Maybe the Night", "Pagtingin" and the critically acclaimed "Kathang Isip" (Imagination).

Prior to its formation as a band, the Guico brothers (then known as The Benjamins) were best known for songwriting the single "Tinatangi" (interpreted by Bayang Barrios and Cooky Chua featuring The Benjamins), which won 2nd runner up and Best Music Video at the PhilPop Music Festival in 2016. The duo released their debut EP in late 2016, and has been expanded into a 9-piece band. They are currently signed to major record label Warner Music Philippines.

The band released new singles and collaborations throughout 2018, including the song "Susi" for the movie Goyo: Ang Batang Heneral and an upcoming song for the music program Coke Studio Homecoming.