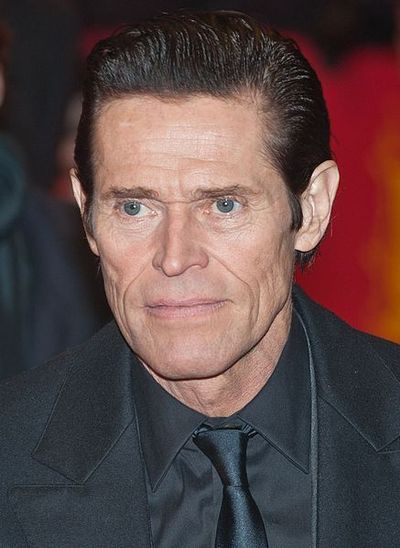 William J. Dafoe (born July 22, 1955), known professionally as Willem Dafoe, is an American film, stage, and voice actor, and a member of the experimental theater company The Wooster Group. Films he appears in include Platoon, Affliction, Off Limits, Streets of Fire, To Live and Die in L.A., Born on the Fourth of July, The English Patient, The Last Temptation of Christ, Mississippi Burning, Mr. Bean's Holiday, The Life Aquatic with Steve Zissou, The Boondock Saints, Spider-Man, The Aviator, and The Fault in Our Stars. He has also had voice roles in both Fantastic Mr. Fox and Finding Nemo, as well as guesting on an episode of The Simpsons. Recently, he provided the voice and motion capture for Nathan Dawkins in the 2013 video game Beyond: Two Souls with Ellen Page.

Dafoe has been nominated for the Academy Award for Best Supporting Actor twice—for Platoon in 1986 and for Shadow of the Vampirein 2000.

Dafoe was born William J. Dafoe in Appleton, Wisconsin. One of seven children of Muriel Isabel (née Sprissler) and Dr. William Alfred Dafoe, he recalled in 2009, "My five sisters raised me because my father was a surgeon, my mother was a nurse and they worked together, so I didn't see either of them much." In high school, he acquired the nickname Willem. His ancestry includes Irish, Scottish, and German. Dafoe studied drama at the University of Wisconsin–Milwaukee, but left after a year and a half to join the experimental theater company Theatre X in Milwaukee, Wisconsin, before moving to New York City in 1976. There he apprenticed under Richard Schechner, director of the avant-garde theater troupe The Performance Group, and became romantically involved with the group's Elizabeth LeCompte, 11 years his senior and who, with her former romantic partner Spalding Gray and others, edged out Schechner and created the Wooster Group. Within a year Dafoe was part of the company.

Dafoe, who would continue with the Wooster Group into the 2000s, began his film career in 1981, when he was cast in Heaven's Gate[8] only to see his role removed from the film during editing. As Dafoe recalled of his first film experience, in which he played a cockfighter.

In the mid-1980s, he was cast by William Friedkin to star in To Live and Die In L.A., in which Dafoe portrays counterfeiter Rick Masters. A year later he starred as the leader of a motorcycle gang in The Loveless, having played a similar role in Streets of Fire. He became "very conscious" that he might be typecast as a villain.

Dafoe would go on to gain his widest exposure to that time playing the compassionate Sergeant Elias in Oliver Stone's Platoon. He enjoyed the opportunity to play a heroic role, and said the film gave him a chance to display his versatility. "I think all characters live in you. You just frame them, give them circumstances, and that character will happen."

Dafoe met director Elizabeth LeCompte at The Performance Group and began a professional and personal relationship there and at its successor company, the Wooster Group. Their son, Jack, was born in 1982. The pair eventually split in 2004. Dafoe married Italian actress, director and screenwriter Giada Colagrande on March 25, 2005, a year after the two had met in Rome at the premiere of one of her films. Dafoe said in 2010, "We were having lunch and I said: 'Do you want to get married tomorrow?'". They did so the following afternoon at a small ceremony with two friends as witnesses. The two worked together on the film Before It Had a Name. The couple divide their time between Rome, New York City, and Los Angeles, California. He has dual Italian and American citizenship.