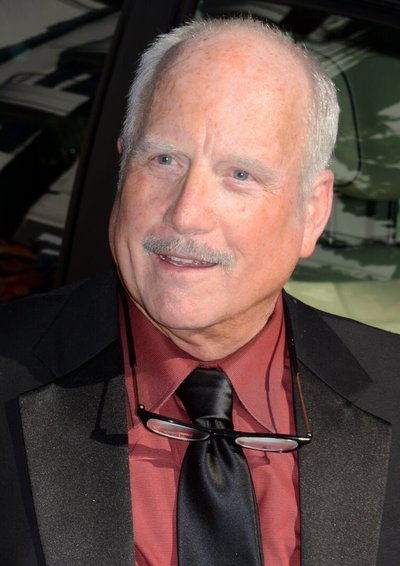 Richard Stephen Dreyfuss (born October 29, 1947) is an American actor best known for starring in a number of film, television, and theater roles since the late 1960s, including the films American Graffiti, Jaws, Close Encounters of the Third Kind, and The Goodbye Girl.

Dreyfuss was born Richard Stephen Dreyfus in Brooklyn, New York, the son of Norman, an attorney and restaurateur, and Geraldine, a peace activist, and was raised in Bayside,Queens. Dreyfuss is Jewish. He has commented that he "grew up thinking that Alfred Dreyfus and  are of the same family." His father disliked New York City, and moved the family first to Europe, and later to Los Angeles, when Dreyfuss was nine. Dreyfuss attended Beverly Hills High School.

Dreyfuss began acting during his youth, at the Beverly Hills Jewish Center. He debuted in the TV production In Mama's House, when he was fifteen. He attended Valley State for a year, and was a conscientious objector during the Vietnam War, working in alternate service for two years, as a clerk in a Los Angeles hospital. During this time, he acted in a few small TV roles on shows, Peyton Place, Gidget, That Girl, Bewitched, and The Big Valley. During the late 1960s and early 1970s, he also performed on stage on Broadway, Off-Broadway, repertory, and improvisational theater.

Dreyfuss's first film part was a small, uncredited role in The Graduate. He had one line, "Shall I get the cops? I'll get the cops". He was also briefly seen as a stage hand in Valley of the Dolls (1967), in which he had a few lines. He appeared in the subsequent Dillinger, and landed a role in the 1973 hit American Graffiti, acting with other future stars such as Harrison Ford and Ron Howard. Dreyfuss played his first lead role in the Canadian film The Apprenticeship of Duddy Kravitz (1974), receiving positive reviews, including praise from Pauline Kael.

Dreyfuss went on to star in the box office blockbusters Jaws (1975) and Close Encounters of the Third Kind (1977), both directed by Steven Spielberg.

Dreyfuss married writer-producer Jeramie Rain in the early 1980s. With her, he had three children: Emily (1983), Benjamin (1986) and Harry (1990). His elder son, Benjamin, was born with Peters Anomaly, a rare genetic eye disorder which, after many operations, left him blind in his left eye. Dreyfuss and Rain have continued to raise money for ophthalmology centers throughout the United States. After his 1995 divorce from Rain, Dreyfuss then married Janelle Lacey in 1999 but they divorced in 2005.

Dreyfuss and Russian-born Svetlana Erokhin married in 2006 and have lived in San Diego since then, although they frequently visit New York City and London, where Dreyfuss once lived. They initially lived in Carlsbad, California. In February 2008, they bought a $1.5 million house in the rural community of Olivenhain in eastern Encinitas, California, and plan to renovate the 1970s structure with state-of-the-art green technologies.