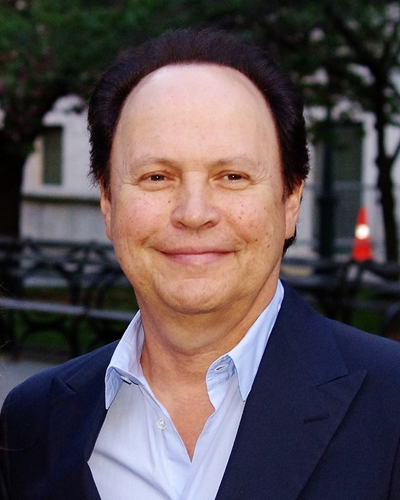 William Edward "Billy" Crystal (born March 14, 1948) is an American actor, writer, producer, comedian, and film director. He gained prominence in the 1970s for playing Jodie Dallas on the ABC sitcom Soap and became a Hollywood film star during the late 1980s and 1990s, appearing in the critical and box office successes When Harry Met Sally... and City Slickers. He has hosted the Academy Awards nine times, most recently at the 84th Academy Awards in 2012.

Crystal was born at Doctors Hospital on the Upper East Side of Manhattan, and initially raised in The Bronx. As a toddler, he moved with his family to 549 East Park Avenue in Long Beach, New York, on Long Island. He and his older brothers Joel and Richard, nicknamed Rip, were the sons of Helen (née Gabler), a housewife, and Jack Crystal, who owned and operated the Commodore Music Store, founded by Helen's father, Julius Gabler. He was also a jazz promoter, a producer and executive for an affiliated jazz record label, Commodore Records, founded by Helen's brother, musician and songwriter Milt Gabler. Crystal grew up in a Jewish family. The three young brothers would entertain by reprising comedy routines from the likes of Bob Newhart, Rich Little and Sid Caesar records their father would bring. Jazz artists such as Arvell Shaw, Pee Wee Russell, Eddie Condon, and Billie Holiday were often guests in the home. With the decline of Dixieland jazz circa 1963, Crystal's father lost his business, and died later that year at the age of 54 after suffering a heart attack while bowling. His mother, Helen Crystal, died in 2001.

After graduation from Long Beach High School in 1965 Crystal attended Marshall University in Huntington, West Virginia on a baseball scholarship, having learned the game from his father, who pitched for St. John's University. Crystal never played a game at Marshall because the program was suspended during his freshman year. He did not return to Marshall as a sophomore, staying back in New York with his future wife. He instead attended Nassau Community College and later New York University, where he graduated in 1970 with a BFA from its Tisch School of the Arts.

Crystal returned to New York City and performed regularly at The Improv and Catch a Rising Star. He studied film and television direction under Martin Scorsese at New York University. In 1976, Crystal appeared on an episode of All in the Family.

Crystal's earliest prominent role was as Jodie Dallas on Soap, one of the first unambiguously homosexual characters in the cast of an American television series. He continued in the role during the series' entire 1977–1981 run.

After hosting Saturday Night Live in 1984, he joined the regular cast. His most famous recurring sketch was his parody of Fernando Lamas, Fernando, a smarmy talk show host whose catchphrase, "You look... mahvelous!," became a media sensation.

Crystal's first film role was in Joan Rivers's 1978 film Rabbit Test. Crystal also made game show appearances such as The Hollywood Squares, All Star Secrets and The $20,000 Pyramid.

Crystal hosted the Academy Awards broadcast in 1990–1993, 1997, 1998, 2000, 2004 and 2012. He returned as emcee for the 2012 Oscar ceremony, after Eddie Murphy backed out of hosting.  His nine times as the M.C. is second only to Bob Hope's 18 in most ceremonies hosted. At the 83rd Academy Awards ceremony in 2011, he appeared as a presenter for a digitally inserted Bob Hope and before doing so was given a standing ovation. Film critic Roger Ebert said when Crystal came onstage about two hours into the show, he got the first laughs of the broadcast. Crystal's hosting gigs have regularly included an introductory video segment in which he comedically inserts himself into scenes of that year's films in addition to a song following his opening monologue.