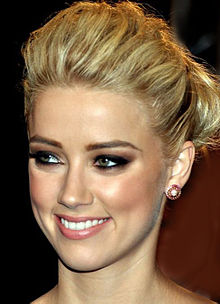 Her breakthrough came in 2008 with roles in Never Back Down and Pineapple Express. She received the Breakthrough Award at Young Hollywood Awards. She got widespread attention after her appearance in films such as The Informers, The Stepfather, Zombieland and The Joneses. She next starred in John Carpenter's The Ward, alongside Nicolas Cage in Drive Angry, and alongside Johnny Depp in The Rum Diary, for which she won a Spotlight Award at Hollywood Film Festival. Recently she appeared in films Paranoia, Machete Kills, 3 Days to Kill and Magic Mike XXL.

Heard has appeared in magazines' Most Beautiful and Sexiest lists. She is also involved in social activism for causes such as LGBT rights and abolishing slavery, and is a supporter of Habitat for Humanity, Girl Up United Nations Foundation, The Art of Elysium and Amnesty International.

Heard was born in Austin, Texas, the daughter of Patricia Paige (Parsons), an internet researcher, and David Clinton Heard, a contractor. She has a sister, Whitney. She dropped out of high school, eventually earning a diploma through a home-study course. When Heard was 16, her best friend died in a car crash and Heard, who was raised Catholic, subsequently declared herself an atheist after being introduced to the works of Ayn Rand by her then-boyfriend. She has said of Rand, "I've read all of her books. Ever since then, I have been obsessed with her ideals. All I've ever needed is myself."

While in Los Angeles, Heard made appearances in several TV shows and two music videos, Kenny Chesney's "There Goes My Life" and Eisley's "I Wasn't Prepared". She was cast as Liz in the pilot episode of The WB's Jack & Bobby (2004), as Riley in an episode of The Mountain (2004) and she had a brief cameo as a salesgirl in The O.C. (2005). Her first movie role was Maria in Friday Night Lights (2004), starring Billy Bob Thornton. Based on actual events, the movie was both a commercial and critical success. She next starred as Shay in Side FX (2005), an independent horror film, and had supporting roles in Drop Dead Sexy (2005), Price to Pay (2006) and You Are Here (2006). Heard had a more prominent role in Niki Caro's North Country (2005), in which she played the teenage version of Josey, Charlize Theron's character. She also appeared in a minor role in Nick Cassavetes' Alpha Dog (2006). In the same year, she starred in an episode of Criminal Minds as Lila Archer, a love interest of main character Spencer Reid.

Heard was next cast in the CW's Hidden Palms. On the show she portrayed Greta Matthews, who suffered the losses of both her mother and boyfriend, Eddie, and befriends Johnny, the antihero of the show. In order to get the part, Heard was asked to lose weight. It took her four months between the pilot and the second episode to lose 25 pounds, giving up alcohol, increasing her workouts and following a macrobiotic diet (no meat, dairy or processed sugar). Hidden Palms premiered in the US on May 30, 2007. Ultimately, the CW wrapped the summer series early; instead of the initial 12-episode arc, only 8 were aired. The show ended on July 4, 2007 two weeks earlier than originally planned.

She was cast in the title role in All the Boys Love Mandy Lane, a horror film that premiered at the Toronto Film Festival in September 2006. The film immediately garnered attention and a deal was secured with Harvey Weinstein. However, nearly a year after its Toronto début, the movie had not reached theaters. In July 2007, Mandy Lane found a new distribution home and the film finally was released in 2008 with a February UK release and June DVD release. The film's director Jonathan Levine said about Amber's casting in the title role that "there was a certain type of beauty and a certain type of innate intelligence that Amber brought to it that is not something you find every day. Certainly, not something you would find in somebody her age. The wisdom she projects, I thought was pretty remarkable." The Los Angeles Times praised's Heard's acting, saying it's her most "definitive [performance] to date." and The Washington Post stated that Heard gave a "psychologically interesting performance."

In 2015, she starred in The Adderall Diaries alongside James Franco, Christian Slater and Ed Harris. Indiewire gave film a mixed review and stated that Heard was "miscast" but yet "she displays much potential and has succeeded in a bid to be taken more seriously." Nick Leyland of The Movie Network enjoyed the film and praised Heard's performance as well. She also starred in a musical drama When I Live My Life Over Again, co-starring Christopher Walken. Heard took singing lessons and learned how to play the piano and guitar for her role. International Business Times described Heard as "talented enough to share a few heartfelt moments in a character that mostly operates on the defensive."

In September 2014, Heard joined the cast of Magic Mike XXL, sequel to the 2012 film Magic Mike. The film was released on July 2015. She portrayed Zoe, a photographer who flirts with the main character Mike, portrayed by Channing Tatum in the film. Digital Spy described the character as "a convincing girl-next-door type" and Screen International stated that "Amber Heard doesn’t get enough screen time as a potential love interest for Mike, but her tomboyish flirtation delights." Heard will also be starring in London Fields— co-starring Billy Bob Thornton (her third collaboration with him), Jim Sturgess, Cara Delevingne, and Theo James— a film directed by newcomer Matthew Cullen. London Fields, in which Johnny Depp appears in a cameo role, is scheduled for release in 2015.

Heard came out in 2010, at GLAAD's 25th anniversary event, but has stated, "I don't label myself one way or another—I have had successful relationships with men and now a woman. I love who I love; it's the person that matters." At the aforementioned GLAAD event, she stated of her decision to come out: "I think when I became aware of my role in the media, I had to ask myself an important question 'Am I part of the problem?' And I think that when millions and millions of hard-working, taxpaying Americans are denied their rights and denied their equality you have to ask yourself what are the factors that are an epidemic problem and that's what this is."

Heard dated photographer Tasya van Ree. She met actor Johnny Depp while filming The Rum Diary, and they began dating in 2012. On February 3, 2015, Heard married Depp in a private civil ceremony at their home in Los Angeles.

Heard has several tattoos, including quotes from Pablo Neruda in Spanish and Omar Khayyam in Persian language.