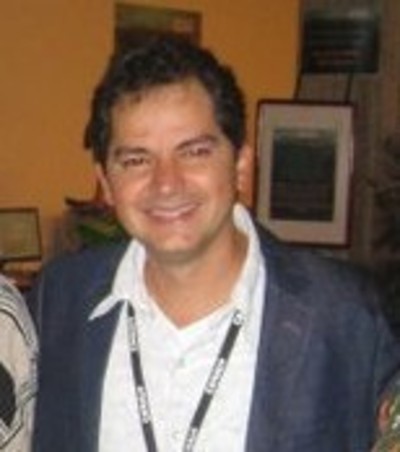 Saldanha was born in Brazil, growing up in Rio de Janeiro. Though he loved cartoons and drawing from an early age, by the time he was an adult, he initially considered a career in computer science, because he did not think a career in art was a viable option. This changed when he became aware of how computer-generated imaging was revolutionizing animation, and discovered the continuing education program at the School of Visual Arts in Manhattan. He entered that program to major in computer animation, saying, "I knew from the first day in class that his was what I wanted to do for the rest of my life". One of his instructors, recognizing his talent, convinced him to enroll in the school's MFA program. Though Saldanha and his wife, Isabella Scarpa, thought this was a risk, they opted to stay in Manhattan so that Saldanha could do so. While at SVA, he completed two prize winning film shorts that were featured in film festivals around the world. It was also at SVA that Saldanha met MFA instructor and future film directing partner Chris Wedge, who invited Saldanha to join Wedge's company Blue Sky Studios. Saldanha graduated from SVA with a Master's degree in Computer Art in 1993.

During its fledgling years, Blue Sky Studios provided special effects and produced animated TV commercials. In 2002, Saldanha and Wedge co-directed the animated feature film Ice Age. The movie was a success, with an opening weekend gross of $46.3 million, the best March opening ever. After co-directing the 2005 film Robots, he broke his previous March opening record with the 2006 Ice Age sequel, Ice Age 2: The Meltdown, which Saldanha directed by himself. He would later direct the 2009 sequel, Ice Age: Dawn of the Dinosaurs. Desiring a change of location after directing three films set in icy locales, Saldanha's next project was the 2011 film Rio, which is set in Saldanha's hometown of Rio de Janeiro. Saldanha, who felt that Rio had never been fully portrayed on film, felt a responsibility to travel to the city with the other animators, so that they could accurately capture Rio's unique environment and habitats. The movie grossed a reported $484 million worldwide.

In October 2012, Saldanha signed a five-year exclusive deal with 20th Century Fox to develop and produce animated and live-action projects. For this purpose, he formed in June 2013 a Fox-based production company, named BottleCap Productions. For 2014, he is directing Rio 2, and is set to direct for 2017 an animated feature adaptation of The Story of Ferdinand. He is also developing an animated feature film based on Alienology from the Ologies fantasy book series. In September 2013, The Wrap reported that Saldanha was in talks with Fox to direct a live-action adaptation of Royden Lepp's graphic novel Rust: Visitor in the Field.

Saldanha and his wife, mathematician Isabella Scarpa, initially lived in a studio apartment in Manhattan's Greenwich Village, but after their second daughter was born, they moved to Hoboken, New Jersey, where they had friends. They continue to live there with their children, Manoela, Sofia, Julia and Rafael.