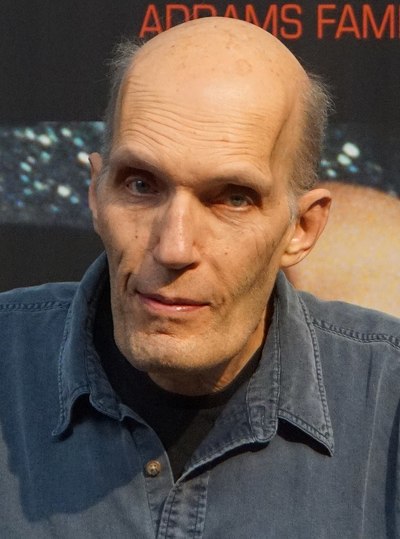 Carel Struycken (born July 30, 1948) is a Dutch film, television, and stage actor. He is best known for playing the Giant in Twin Peaks, Mr. Homn in Star Trek: The Next Generation, and Lurch in the films The Addams Family, Addams Family Values, and Addams Family Reunion. Because he is 2.13 m (7 ft 0 in) tall, he often plays character and comedic roles in which height is a major part.

Struycken was born in The Hague, Netherlands. When he was four years old, his family moved to Curaçao, an island in the Caribbean. There, at age 15, he composed several Caribbean waltzes. At 16, he returned to his home country, where he finished secondary school. He graduated from the directing program at the film school in Amsterdam. After that, he spent a year at the American Film Institute, in Los Angeles. Struycken's height is due to acromegaly.

Struycken collaborated on several projects with writer and director Rene Daalder, including the 1986 punk rock musical Population: 1, which featured Tomata du Plenty, of The Screamers, and which was released on DVD in October 2008.

In 1978, Struycken was "discovered" as an actor at the corner of Hollywood and Vine in Los Angeles by a woman who had abandoned her car in the middle of the street, calling after him: "We need you for a movie!". The movie was Sgt. Pepper's Lonely Hearts Club Band.

Struycken played Terak in the 1985 TV movie Ewoks: The Battle for Endor, a spinoff of Return of the Jedi.

Struycken appeared as Fidel in the 1987 film The Witches of Eastwick. That same year, he appeared as Mr. Homn in "Haven", an episode of the television series Star Trek: The Next Generation, a role he would reprise in four more episodes until 1992.

In 1991, he starred as Lurch in the feature film The Addams Family. He reprised the role in the 1993 sequel, Addams Family Values.

He portrayed the mystical guide-character "The Giant" in David Lynch and Mark Frost's hit 1990–91 ABC television series Twin Peaks, and reprised the role in the 2017 Showtime revival of the series.

Carel Struycken is married to an American woman and has two children. He lives in the Los Angeles area. His brother Peter Struycken is a noted Dutch artist, who has won the 2012 Heineken Prize for Arts of the Royal Netherlands Academy for Sciences.

Struycken is also an avid photographer. He maintains a website devoted to his spherical panoramas and shares a photography blog with Josh Korwin.