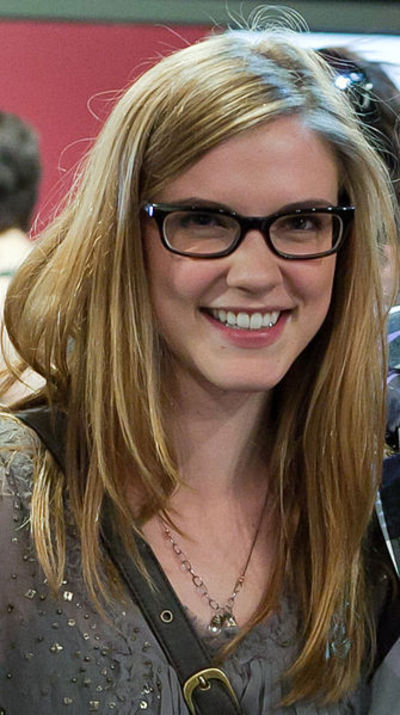 Sara Canning (born July 14, 1987) is a Canadian actress. She co-starred on The CW television series The Vampire Diaries as Jenna Sommers, and appeared in the 2009 feature film, Black Field. She starred as Dylan Weir in the Canadian television series, Primeval: New World, and as Dr. Melissa Conner on the Global medical drama Remedy. Canning appeared in the 2017 blockbuster film War of the Planet of the Apes.

Canning was born in Gander, Newfoundland, Canada, the daughter of Wayne and Daphne Canning. She lived in Gander until age eleven, and was then raised in Sherwood Park, near Edmonton, Alberta. She competed as a figure skater in her childhood and early adolescent years, and became interested in theatre as a student at F.R. Haythorne Junior High. Canning starred in several stage productions while attending Bev Facey Community High School, and acted in shows at her hometown stage at Festival Place.

Canning made her professional acting debut in George Orwell's 1984 at the Citadel Theatre in Edmonton at the age of 18. She began studying general arts at the University of Alberta, and considered going into journalism. Still interested in performing, Canning left university at 19 and moved to Vancouver to pursue a career in acting. She graduated from a year-long screen acting program at Vancouver Film School in 2007.

Canning found an agent and began acting in television series and TV films produced in Vancouver. She worked in a restaurant and would take time off to film. Her first role was in 2008, playing Nicky Hilton in Paparazzi Princess: The Paris Hilton Story. In 2009, she guest-starred on Smallville and Kyle XY, and starred in the based-on-real-events TV movie, Taken in Broad Daylight. She played Anne Sluti, a 17-year- old girl who was abducted by a demented criminal (James Van Der Beek).

In 2009, Canning filmed a pilot episode for the CW network television series, The Vampire Diaries. She then starred in the feature film, Black Field, a 19th-century gothic period piece directed by Danishka Esterhazy. Canning shot the drama near Tyndall, Manitoba, Canada in May 2009. She played Maggie McGregor, the older of two British sisters struggling take make their way on the Canadian Prairies. The film premiered at the Vancouver International Film Festival in 2009. The Vampire Diaries series was picked up three weeks after she completed work on the film.

Canning co-starred on The Vampire Diaries as Jenna Sommers, the aunt and guardian of Elena Gilbert (Nina Dobrev), and her younger brother Jeremy (Steven R. McQueen). Canning was younger or the same age as her fellow cast members who played high school students. Makeup artists and the wardrobe team worked to make her look older. Canning also downplayed her Canadian accent for the role. Matthew Davis played her character's love interest, Alaric. Canning appeared on the second season of The Vampire Diaries from 2010–2011, until her character was killed in the episode "The Sun Also Rises".

Canning is interested in writing and directing. As of September 2010, she was co-writing a love story set in the Western time period. In 2011, she worked on a short film noir, titled Corvus, and shot the Lifetime network film, Hunt for the I-5 Killer, in Vancouver. She filmed the Hallmark Movie Channel Western, Hannah's Law, in Calgary, Alberta in late 2011, starring alongside Greystone Holt.

Canning appeared in I Think I Do, which began filming in January 2012 in Edmonton. She starred as Audrey, an event planner who runs a business alongside her two sisters (Mia Kirschner and Jenny Cooper). The romantic comedy aired in 2013 on the W and Lifetime networks. She filmed the independent romantic comedy, The Right Kind of Wrong, in Banff, Alberta in late 2012, starring alongside Ryan Kwanten and Catherine O'Hara, directed by Jeremiah Chechik.

Canning starred in the 2012–2013 Space channel television series, Primeval: New World, a Canadian spin-off of the British sci-fi series Primeval. She played predator control expert Dylan Weir, a member of a dinosaur hunting team; the series was filmed in Vancouver. Canning also starred in 2012 with Aaron Ashmore in the dark romantic comedy, I Put a Hit on You. In 2013, she joined the cast of the psychological drama film, Eadweard, starring Michael Eklund. She played Flora, the wife of 19th-century photographer Eadweard Muybridge.

Canning joined the cast of the film, War for the Planet of the Apes in 2015, a sequel to 2014's Dawn of the Planet of the Apes. She appeared in On the Farm, a Rachel Talalay-directed TV film about serial killer Robert Pickton, and in Hello Destroyer, which premiered at the 2016 Toronto International Film Festival. Canning played Jacquelyn Seleszyka in the 2017 Netflix series, A Series of Unfortunate Events, based on Daniel Handler's book series of the same. She will also star as the head of a boarding school, Ms. Brixil, in the thriller, Level 16, written and directed by Danishka Esterhazy.

Canning relocated to Atlanta, Georgia to film The Vampire Diaries. She stated to Parade that she found that the Southern U.S. had "a much different culture than the west coast of Canada", but it became like her "second home". Canning lived in Atlanta for two years and returned to Vancouver, British Columbia, Canada after finishing the series.