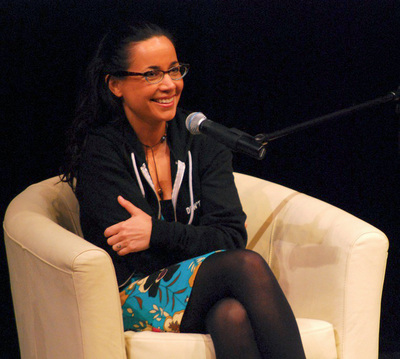 She began her career as a stand-up comic in the late 1980s. In 1992, she made her television debut on the Ben Stiller Show, and followed this up with roles on The Larry Sanders Show and Saturday Night Live.

She moved to film in 1991 with an appearance as a fast food restaurant counter person in Late for Dinner, and also starred in The Truth About Cats and Dogs.

Garofalo is an outspoken progressive and feminist activist. From March 2004 to July 2006, she hosted Air America Radio's The Majority Report with Sam Seder.

Garofalo was born in Newton, New Jersey, the daughter of Joan and Carmine Garofalo. Her mother was a secretary, in the petrochemical industry, who died of cancer when Janeane was 24. Her father is a former executive at Exxon. Garofalo was raised as a conservative Catholic and is of Italian and Irish descent. She grew up in various places, including Ontario, California; Madison, New Jersey; and Katy, Texas. Garofalo is quoted as having disliked life in Texas because of the heat and humidity and the emphasis on prettiness and sports in high school.

While studying history at Providence College, Garofalo entered a comedy talent search sponsored by the Showtime cable network, winning the title of "Funniest Person in Rhode Island." Her original gimmick was to read off her hand, which was not successful in subsequent performances. Dreaming of earning a slot on the writing staff of the TV show Late Night with David Letterman, she became a professional standup comedienne upon graduating from college with degrees in History and American Studies. She struggled for a number of years, working briefly as a bike messenger in Boston.

Garofalo has described herself thus: "I guess I just prefer to see the dark side of things. The glass is always half empty. And cracked. And I just cut my lip on it. And chipped a tooth."

Garofalo began her career in stand-up comedy in the late 1980s during the pre-grunge era. Her appearance was often in line with late 1980s style: disheveled with thick black glasses and unkempt hair. Her comedy is often self-deprecating; she has made fun of popular culture and the pressures on women to conform to body image ideals promoted by the media.

Garofalo's comedy shows typically involve her notebook, which is filled with years' worth of article clippings and random observations she references for direct quotes during her act. Garofalo has said that she does not tell jokes as much as make observations designed to get laughs. She was part of the alternative comedy scene in Los Angeles in the early 1990s, appearing at Un-Cabaret and other venues and co-created the Eating It comedy series which ran at Luna Lounge on the Lower East Side of New York City between 1995 and 2005. She did a one-hour stand-up special, "If You Will," at Seattle's Moore Theatre, that aired on Epix in June 2010 and was released on DVD in September 2010.

Garofalo's big break came in 1990 after meeting Ben Stiller at Canter's Deli in Los Angeles, where they were hanging out with stand-up friends. They bonded over their "love of SCTV, early Saturday Night Live, and Albert Brooks."

Her television series debut was on the short-lived Ben Stiller Show on Fox in 1992, on which she was a cast member alongside longtime friends Bob Odenkirk and Andy Dick. A chance meeting on the set of that show led her to be offered the role of Paula on The Larry Sanders Show on HBO, earning her two Emmy Award nominations in 1996 and 1997.

Garofalo's breakthrough into film came in 1994's Reality Bites as Winona Ryder's Gap-managing best friend Vickie. The role helped solidify Garofalo's status as a Generation X icon. In 1996, Garofalo earned a starring role in the critically acclaimed The Truth About Cats & Dogs, a variation on Cyrano de Bergerac which featured top-billed Uma Thurman in the lead role as a beautiful but dim-witted model, while Garofalo played the larger role of Abby, a highly intelligent radio host. Initially an independent film, it became a studio movie when Thurman was signed. The film was a modest hit.

Based on the success of this film, a producer then offered her the leading lady role in Jerry Maguire with Tom Cruise if she could lose weight; after trimming down, however, she learned that Renée Zellweger had won the part instead.

Garofalo married Robert Cohen, who was then a writer for The Ben Stiller Show, in Las Vegas in 1991. She later explained it was intended to be a joke, not thinking it was legal unless filed at a local courthouse. It was revealed later, when Cohen tried to actually marry someone else, that the marriage was indeed legal. The marriage was dissolved in 2012.

In Garofalo's 2010 stand-up show If You Will, she describes herself as asexual. Garofalo says, "I don't have a fear of intimacy, I have sort of a genuine lack of interest", adding jokingly, "which is not good for my boyfriend of ten years".