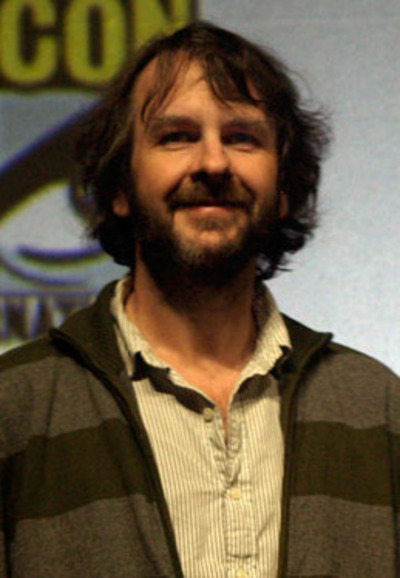 Sir Peter Robert Jackson, ONZ KNZM (born 31 October 1961), is a New Zealand film director, producer and screenwriter who is best known for his The Lord of the Rings trilogy and its prequel The Hobbit trilogy, adapted from the novels of the same name by J. R. R. Tolkien. His other notable films include King Kong, Heavenly Creatures, The Frighteners, Forgotten Silver, Dead Alive/Braindead and The Lovely Bones. He has also produced District 9, West of Memphis and The Adventures of Tintin: The Secret of the Unicorn.

He began his career with "splatstick" horror comedies including Meet the Feebles, Braindead and Bad Taste. He shared an Academy Award for Best Original Screenplay nomination with his partner Fran Walsh for the film Heavenly Creatures before coming to mainstream prominence. Jackson has been awarded three Academy Awards in his career, including the award for Best Director in 2003. He has also received a Golden Globe, four Saturn Awards and three BAFTAs amongst others.

Jackson was born on 31 October 1961. He grew up in Pukerua Bay, a coastal town near Wellington. His parents - Joan (born Ruck), a factory worker and housewife, and William (Bill) Jackson, a wages clerk - were both immigrants from England. His father was a veteran of the Siege of Maltain World War II. As a child, Jackson was a keen film fan, growing up on Ray Harryhausen films as well as finding inspiration in the television series Thunderbirds and Monty Python's Flying Circus. After a family friend gave the Jacksons a Super 8 cine-camera with Peter in mind, he began making short films with his friends. Jackson has long cited King Kong as his favourite film and around the age of nine he attempted to remake it using his own stop-motion models. Also as a child Jackson made a WWII epic and a James Bond spoof named Coldfinger. Most notably though was a 20 minute short called The Valley which won him a special prize because of the shots he used.

In school Jackson expressed no interest (or skill) in sports. His classmates also remember him wearing a Duffel coat with "an obsession verging on religious." Jackson had no formal training in film-making, but learned about editing, special effects and make-up largely through his own trial and error. As a young adult Jackson discovered the work of author J. R. R. Tolkien after watching The Lord of the Rings (1978), an animated film by Ralph Bakshi that was a part-adaptation of Tolkien's fantasy trilogy. When he was 16 years old, Jackson left school and began working full-time as a photo-engraver for the local newspaper. For the 7 years he worked there, Jackson lived at home with his parents so he could save as much money as possible to spend on film equipment. After two years of work Jackson bought a 16 mm camera, and began shooting a short film that later became Bad Taste.

Over four years (from 1983 to 1987) Jackson's first feature, Bad Taste, grew in haphazard fashion from a short film into a 90-minute splatter comedy, with many of Jackson's friends acting and working on it for free. Shooting was normally done in the weekends since Jackson was now working full-time. Bad Taste is about aliens that come to earth with the intention of turning humans into food. Jackson had two acting roles including a famous scene in which he fights himself on top of a cliff.

The film was finally completed thanks to a late injection of finance from the New Zealand Film Commission, after Jim Booth, the body's executive director, became convinced of Jackson's talent (Booth later left the Commission to become Jackson's producer). In May 1987, Bad Taste was unveiled at the Cannes Film Festival, where rights to the film quickly sold to twelve countries.

Released in 1994 after Jackson won a race to bring the story to the screen, Heavenly Creatures marked a major change for Jackson in terms of both style and tone. The film is based on real-life events: namely the Parker–Hulme murder case in which two teenage girls in 1950s Christchurch became close friends and later murdered the mother of one of the girls. Jackson's partner Fran Walsh helped persuade him that the events had the makings of a movie; Jackson has been quoted saying that the film "only got made" because of her enthusiasm for the subject matter. Many New Zealanders were apprehensive about how Jackson would treat the material, an apprehension that would later turn in many cases to relief. The film's fame coincided with the New Zealand media tracking down the real-life Juliet Hulme, who now writes books under the name Anne Perry. Jackson would cast the actors Melanie Lynskey and Kate Winslet in the roles of Parker and Hulme. Heavenly Creatures received considerable critical acclaim, including an Academy Award nomination for Best Original Screenplay and making top ten of the year lists in Time, The Guardian, The Sydney Morning Herald, and The New Zealand Herald. The success of Heavenly Creatures won Jackson attention from US company Miramax, who promoted the film vigorously in America and signed the director to a first-look deal.

Peter Jackson won the rights to film J. R. R. Tolkien's epic in 1997 after meeting with producer Saul Zaentz. Originally working with Miramax towards a two-film production, Jackson was later pressured to render the story as a single film, and finally overcame a tight deadline by making a last minute deal with New Line, who were keen on a trilogy.

Principal photography stretched from 11 October 1999 to 22 December 2000 with extensive location filming across New Zealand. With the benefit of extended post-production and extra periods of shooting before each film's release, the series met huge success and sent Jackson's popularity soaring. The Return of the King itself met with huge critical acclaim, winning eleven Oscars, including Best Picture and Best Director. The film was the first of the fantasy film genre to win the award for Best Picture and was the second sequel to win Best Picture (the first being The Godfather Part II).

Jackson is known for his attention to detail, a habit of shooting scenes from many angles, a macabre sense of humour, and a general playfulness - the latter to the point where The Lord of the Rings conceptual designer Alan Lee jokingly remarked "the film is almost incidental really".

Jackson was a noted perfectionist on the Lord of the Rings shoot, where he demanded numerous takes of scenes, requesting additional takes by repeatedly saying, "one more for luck". Jackson is also renowned within the New Zealand film industry for his insistence on "coverage" — shooting a scene from as many angles as possible, giving him more options during editing. Jackson has been known to spend days shooting a single scene. This is evident in his work where even scenes featuring simple conversations often feature a wide array of multiple camera angles and shot-sizes as well as zooming closeups on characters' faces. One of his most common visual trademarks is shooting close-ups of actors with wide-angle lenses.