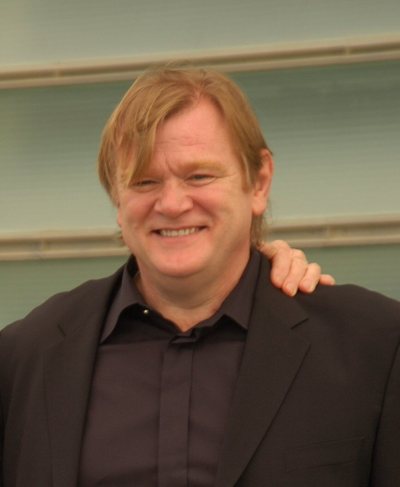 Brendan Gleeson (born 29 March 1955) is an Irish actor. His best-known films include Braveheart, Gangs of New York, In Bruges, 28 Days Later, Troy, the Harry Potter films, The Guard and the role of Michael Collins in The Treaty. He won an Emmy Award in 2009 for his portrayal of Winston Churchill in the film Into the Storm.

Gleeson was born in Dublin, the son of Pat and Frank Gleeson. Gleeson has described himself as having been an avid reader as a child. He received his second level education at St. Joseph's CBS in Fairview, Dublin where he was a member of the school drama group. After training as an actor, he returned to Ireland and worked for several years as a secondary school teacher of Irish and English at the now defunct Catholic Belcamp College in North County Dublin, which closed in 2004. He was working simultaneously as an actor while teaching, doing semi-professional and professional productions in Dublin and surrounding areas. He left the teaching profession to commit full-time to acting in 1991.

Gleeson started his film career at the age of 34. He first came to prominence in Ireland for his role as Michael Collins in The Treaty, a television film broadcast on RTÉ One, and for which he won a Jacob's Award in 1992. He has acted in such films as Braveheart, I Went Down, Michael Collins, Gangs of New York, Cold Mountain, 28 Days Later, Troy, Kingdom of Heaven, Lake Placid, A.I. Artificial Intelligence, Mission: Impossible II, and The Village. He won critical acclaim for his performance as Irish gangster Martin Cahill in John Boorman's 1998 film The General.

He has been married to Mary (née Weldon) since 1982. He has four sons, Domhnall, Bríain, Fergus and Rúairí. Domhnall and Bríain are also actors. His brother, Barry Gleeson, is a well-known singer in An Góilín traditional singers' club.