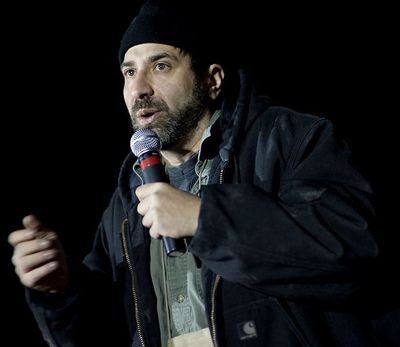 Dave Attell (born January 18, 1965) is an American stand-up comedian, writer and actor, best known as the host of Comedy Central's Insomniac with Dave Attell and The Gong Show with Dave Attell. Born in Queens, New York, he grew up in Rockville Centre, New York and now lives in New York City.

After graduating from New York University in 1987 with a degree in communications, Attell worked menial jobs during the day and put in his time at comedy clubs at night. He worked his first gig at Governor's in Levittown and, according to Attell, "totally bombed".

Perhaps his biggest break was achieved on November 23, 1993, when he made his first appearance on The Late Show with David Letterman. The appearance was seen by Saturday Night Live creator Lorne Michaels, who then recruited Attell to be a writer, and occasional performer, on SNL. Attell can be seen behind Chris Farley during the famous "Rudy Giuliani Inauguration" sketch. Attell worked on the show for the '93–'94 season.

In 1995, Attell was featured on two HBO specials: alongside up-and-comers Louis C.K., Anthony Clark, Eric Tunney and Dave Chappelle, he was a featured performer on the 1995 Young Comedians Special, hosted by Garry Shandling. He was also given his own 60-minute special on the channel's HBO Comedy Showcase. Subsequently, Attell was also given an episode of HBO Comedy Half-Hour in 1997.

In 1995, Attell appeared as Squiggly Dave on Dr. Katz, Professional Therapist. In 1999 the network issued Attell an installment in their Comedy Central Presents series.

The same year the network signed him on as a regular commentator on their satirical news show The Daily Show. When he arrived in 1999, the show was just finding its audience after the departure of host Craig Kilborn and the arrival of Jon Stewart, an old friend of Attell's from the New York comedy circuit. The three-year stint gave Attell access to a mass audience on a regular basis (The Daily Show has done much the same for comedians Stephen Colbert, Steve Carell, Lewis Black and others). Attell's series of commentary on the show was called "The Ugly American".

In 2003, Attell began appearing semi-regularly on Tough Crowd with Colin Quinn. The show featured many of the performers he works with every day at the underground comedy club the Comedy Cellar and is based on the conversations they would have off-stage at the Olive Tree Cafe, the restaurant above the club. The unscripted show was canceled in November 2004.

Pootie Tang saw Attell as the bumbling corporate lackey, "Frank". The film was written and directed by fellow comedian Louis C.K. It co-starred Lance Crouther, Wanda Sykes and Chris Rock among others.