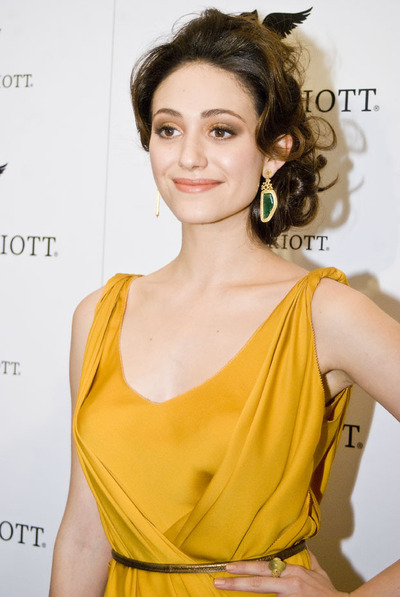 Emmanuelle Grey "Emmy" Rossum (born September 12, 1986) is an American actress and singer-songwriter. She has starred in movies including Songcatcher (2000), An American Rhapsody, (2001) and Passionada (2002). Her role in Mystic River (2003) garnered her wider recognition. She starred in the blockbuster film The Day After Tomorrow (2004) and received critical acclaim for her performance in The Phantom of the Opera (2004). She has since starred in Poseidon (2006), Dragonball: Evolution (2009), Dare (2009) and Beautiful Creatures (2013).

In 2007, Rossum released her debut album, Inside Out. She also released a Christmas EP the same year, titled Carol of the Bells. In 2013 she released a follow up album called Sentimental Journey.

She currently stars on the Showtime dramedy Shameless, as Fiona Gallagher.

Rossum was born in New York City. She is the only child of Cheryl Rossum, a single mother who worked as a corporate photographer. Rossum's mother is Jewish and Rossum's father is Protestant. Part of her family immigrated from Russia. Her parents separated while her mother was pregnant; as of 2007, she had met her father twice. She was named after her great-grandfather, whose first name was Emanuel, using the feminine spelling Emmanuelle. She is a relative, by marriage, of designer Vera Wang (Wang was married to Rossum's cousin).

Upon singing "Happy Birthday" in all twelve keys, Rossum was welcomed to join the Metropolitan Opera Children's Chorus by chorus director Elena Doria at the age of seven. Over the course of five years, she sang onstage with the chorus and had the chance to perform with other opera greats, such as Plácido Domingo and Luciano Pavarotti. For anywhere from $5 to $10 a night, Rossum sang in six different languages in 20 different operas, including La bohème,Turandot, a Carnegie Hall presentation of La damnation de Faust, and A Midsummer Night's Dream. She also worked under the direction of Franco Zeffirelli in Carmen. Rossum joked in interviews that her vocal talent and affinity for music developed because her mother always listened to classical music and operas while she was pregnant with her.

By age twelve, Rossum had grown too big for children's costumes. An increasing interest in pursuing acting led to taking classes with Flo Salant Greenberg of The New Actors Workshop in New York City. She also hired an agent and auditioned for many acting roles. Rossum attended the Spence School, a private school in Manhattan, for years, before dropping out to pursue career opportunities. She received her high school diploma at 15 years old via online extension courses offered by Stanford University's Education Program for Gifted Youth (EPGY). She later attended Columbia University.

Rossum's television debut was in 1997, making a guest appearance on Law & Order as Alison Martin. Rossum made her silver screen debut in 2000's Songcatcher as Deladis Slocumb, an Appalachian orphan. Debuting at the Sundance Film Festival, the film won the Special Jury Award for Outstanding Ensemble Performance. For her role, Rossum received an Independent Spirit Award nomination for Best Debut Performance and also had the opportunity to sing a duet with Dolly Parton on the Songcatcher soundtrack. Variety magazine named Rossum as "One of the Ten to Watch" in 2000.

In Nola (2003), Rossum played the title character, who was an aspiring songwriter. In her first major studio film, Clint Eastwood's Mystic River, Rossum starred as Katie Markum, the ill-fated daughter of small-business owner Jimmy Markum, played by Sean Penn. As Katie, Rossum was said to have "projected an aura of innocence that made her character's tragic death memorable and heartbreaking."

Following Mystic River, Rossum had a breakthrough role as Laura Chapman in the Roland Emmerich eco-disaster film The Day After Tomorrow. She later returned to New York, where she was the last to audition, in full costume and make-up, for the coveted role of Christine Daae in the on-screen adaptation of composer Andrew Lloyd Webber's The Phantom of the Opera. Following an international search for talent, and having nearly missed the audition on account of a family engagement, Rossum was asked to audition in person for Webber at his home in New York. “When I arrived, he just said, ‘Shall we?’ meaning I was to sing. And I did," Rossum has said of the audition. After seeing her audition, Webber felt she proved her ability to play the young opera singer who becomes the object of the Phantom's obsessive love. For her role as Christine Daae, Rossum received a Golden Globe Award nomination for Best Actress in a musical or comedy. She is the youngest actress ever to be nominated for that particular award. She also received a Critics' Choice Award for Best Young Actress, along with a Saturn Award for Best Performance by a Younger Actor and other awards.

Rossum married music executive Justin Siegel in February 2008. He filed for divorce on September 25, 2009, in Los Angeles, citing irreconcilable differences. In October 2009, Rossum was reported to be dating Counting Crows frontman Adam Duritz, with whom she had toured during the summer of 2009. Rossum and Duritz broke up in September 2010, and her divorce from Siegel was finalized three months later in December 2010. Rossum dated her co-star Tyler Jacob Moore from the show Shameless from 2011 to 2013. Rossum is currently dating Sam Esmail, the director and writer of Comet, whom she met while filming the movie in 2013.