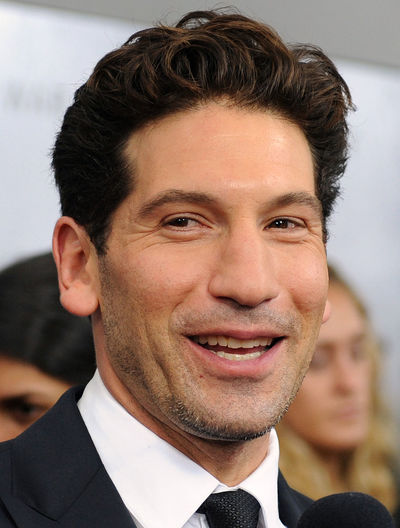 Jonathan Edward "Jon" Bernthal (born September 20, 1976) is an American actor best known for his television role as Shane Walsh on the AMC series The Walking Dead and film roles in The Wolf of Wall Street (2013), Fury (2014), and Sicario (2015). He portrayed Frank Castle / The Punisher in the Netflix series Daredevil and is set to reprise his role in the Netflix series The Punisher.

Bernthal was born and raised in Washington, D.C., the son of Joan Lurie (née Marx) and Eric Lawrence "Rick" Bernthal, a lawyer with Latham & Watkins LLP. His paternal grandfather was musician and producer Murray Bernthal. He has two brothers, Nicholas and Thomas. His family is Jewish.

After high school, Bernthal briefly studied at Skidmore College in Saratoga Springs, and later attended The School of Moscow Art Theatre in Russia. During his time there, he played catcher on a semi-professional baseball team.

Since 2002, Bernthal has performed in over 30 plays regionally and Off-Broadway, including many with his own award-winning theatre company, Fovea Floods. He also had small guest roles in television series such as Boston Legal, CSI: Miami, and How I Met Your Mother. Bernthal booked his first regular role on a television series with the sitcom The Class, which was created by Friends co-creator David Crane. The show was cancelled after only one season. After this, he had roles in films such as World Trade Center and Day Zero.

In 2009, Bernthal had a supporting role in the Ben Stiller comedy film Night at the Museum: Battle of the Smithsonian as mobster Al Capone. The same year, he became a series regular on the television series Eastwick, which was cancelled after only one season.

In 2010, Bernthal portrayed Sgt. Manuel Rodriguez on the HBO miniseries The Pacific. Bernthal portrayed Shane Walsh in Frank Darabont's The Walking Dead, based on the comic book series of the same name. He was a regular on the show until 2012 and was nominated for the Breakout Performance – Male Award at the 2011 Scream Awards for his performance. That same year, he guest starred in an episode of NBC's legal comedy-drama series Harry's Law as Lucas Trassino. In 2013, he appeared in the crime drama film Snitch.

Bernthal reunited with Darabont for the TNT series Mob City, in which he portrayed Joe Teague, a police officer working in a corrupt 1940s Los Angeles, which was subsequently cancelled after one season. He also had supporting roles in the Martin Scorsese film The Wolf of Wall Street (2013) and the sports comedy film Grudge Match (2013). He played southerner Grady "Coon-Ass" Travis in the 2014 World War II film Fury, opposite Brad Pitt, Shia LaBeouf, Michael Peña and Logan Lerman.

In June 2015, Marvel announced that Bernthal would portray Frank Castle / The Punisher in the second season of Netflix's superhero series Daredevil, which was released on March 18, 2016. He will then star in the Irish action thriller film Pilgrimage, alongside Tom Holland and Richard Armitage.

Bernthal married Erin Angle, the niece of professional wrestler Kurt Angle, on September 25, 2010 in Potomac, Maryland. They have two sons, Henry and Billy (born August 2011 and February 2013), and a daughter, Adeline (born February 2015). Bernthal is a cousin of Adam Schlesinger, bassist of the band Fountains of Wayne.

Together with his brother Nicholas, an orthopaedic surgeon at UCLA, Bernthal runs a nonprofit organization called Drops Fill Buckets, described as an "impact-driven, entrepreneurial approach to making a difference".