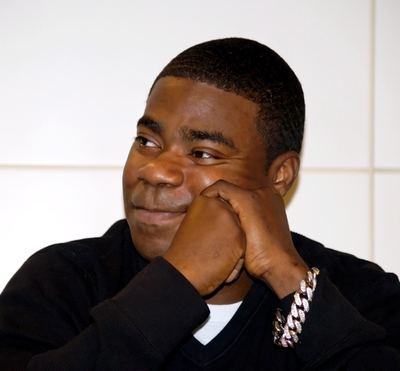 Tracy Jamal Morgan (born November 10, 1968) is an American actor and comedian, known for his eight seasons as a cast member on Saturday Night Live, and for his role of Tracy Jordan on the NBC TV series 30 Rock.

Morgan was raised in a housing project in Bedford Stuyvesant, Brooklyn, the second-oldest of five children of Alicia (née Warden), a homemaker, and Jimmy Morgan, a musician who returned from military duty in the Vietnam War recovering from addiction to heroin Tracy, the target of bullies as a child, attended DeWitt Clinton High School. Tracy Morgan had married his girlfriend Sabrina that year and dropped out of high school four credits short of a diploma. Already raising their first son, and living on welfare, Morgan sold crack cocaine with limited success, but began earning some money performing comedy on the streets after his best friend was murdered. He said in 2009, "He would say to me, 'Yo, Tracy, man, you should be doing comedy.' A week later, he was murdered. And that for me, that was like my Vietnam. I had my survival guilt when I started to achieve success. Why I made it out and some guys didn't." Morgan embarked on a standup comedy career, successfully enough that, he said, "I finally moved to a nice community in [the Bronx neighborhood] of Riverdale from a run-down apartment next to Yankee Stadium in the Bronx...."

Morgan made his screen debut on Martin, where he played Hustle Man. The character sold various items he had from the "hood," always greeting people with his trademark "What's happ'n, chief?" and had a pet dog that he dressed as a rapper. In the 2003 Chris Rock film Head of State, Morgan appeared as a man watching television, often questioning why they are not watching Martin.

Morgan married his high school sweetheart Sabrina in 1985. They have three sons together: Tracy (b. 1986), Malcom (b. 1987), and Gitrid (b. 1991). The middle son's name has also been published as "Malcolm" and "Malcomb". Morgan filed for divorce at Bronx Supreme Court on August 7, 2009 after 23 years of marriage. Morgan credits one of his sons with having saved him from his alcoholism. Morgan said in 2009, "I'm estranged from my own mother and most of my family, and I'm not sure that's going to change much."

Morgan said in September 2011 that he and model Megan Wollover had become engaged six months earlier in San Francisco. Morgan announced in January 2013 he and Wollover are expecting their first child. On July 2, 2013, Wollover gave birth to their daughter, Maven Sonae, in New York.