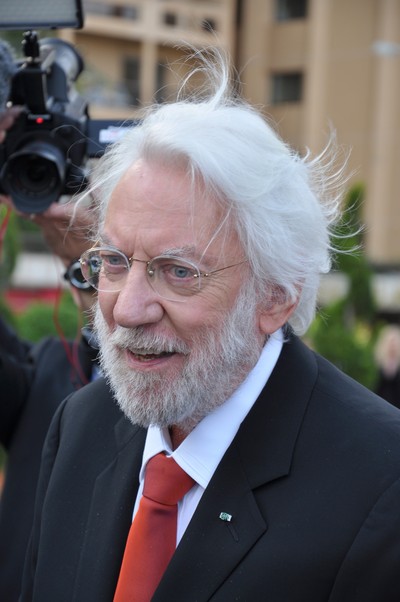 Donald McNichol Sutherland, OC (born 17 July 1935) is a Canadian actor whose film career spans nearly 50 years. Some of Sutherland's more notable movie roles have included offbeat soldiers in popular war movies such as The Dirty Dozen, MASH and Kelly's Heroes, as well as a diverse range of characters in other noted films such as, Fellini's Casanova, Klute, Don't Look Now, Invasion of the Body Snatchers, JFK, Ordinary People, Pride & Prejudice, and The Hunger Games. He is the father of actor Kiefer Sutherland.

Sutherland was born in Saint John, New Brunswick, the son of Dorothy Isobel (née McNichol; 1892–1956) and Frederick McLea Sutherland (1894–1983), who worked in sales and ran the local gas, electricity, and bus company. His ancestry includes Scottish, as well as German and English. As a child he battled rheumatic fever, hepatitis and poliomyelitis. His teenage years were spent in Nova Scotia, and he got his first part time job at age 14 as a news correspondent for local radio station CKBW in Bridgewater, Nova Scotia. He then studied at Victoria College, University of Toronto, where he met his first wife Lois Hardwick (not the child star of the same name), and graduated with a double major in engineering and drama. He had at one point been a member of the "UC Follies" comedy troupe in Toronto. He changed his mind about becoming an engineer, and subsequently left Canada for England in 1957, studying at the London Academy of Music and Dramatic Art.

After quitting the London Academy of Music and Dramatic Art (LAMDA), Sutherland spent a year and a half at the Perth Repertory Theatre in Scotland. In the early-to-mid-1960s, Sutherland began to gain small roles in British films and TV. He featured alongside Christopher Lee in horror films such as Castle of the Living Dead (1964) and Dr. Terror's House of Horrors (1965). In the same year, he appeared in the Cold War classic The Bedford Incident and appeared in the TV series The Saint, in the 1965 episode "The Happy Suicide". In 1966, Sutherland appeared in the BBC TV play Lee Oswald - Assassin, playing a friend of Lee Harvey Oswald, Charles Givens (even though Givens himself was African-American).

In 1967, he appeared in "The Superlative Seven", an episode of The Avengers. He also made a second, and more substantial appearance in The Saint. The episode, "Escape Route", was directed by the show's star, Roger Moore, who later recalled that Sutherland "asked me if he could show it to some producers as he was up for an important role... they came to view a rough cut at the studio and he got The Dirty Dozen". The film, which starred Lee Marvin and Charles Bronson, was the 5th highest grossing film of 1967 and MGM's highest grossing movie of the year.

In 1968, after the breakthrough in the UK-filmed The Dirty Dozen, Sutherland left London for Hollywood. He then made a further two war films in relative quick succession, taking the lead as "Hawkeye" Pierce in Robert Altman's MASH in 1970; and, again in 1970, as hippie tank commander Sgt. Oddball in Kelly's Heroes.

Sutherland was made an Officer of the Order of Canada on 18 December 1978 and was inducted into Canada's Walk of Fame in 2000. He maintains a home in Georgeville, Quebec.

His son, Kiefer, an actor best known for his role as Jack Bauer on the TV action/thriller series 24, and his twin sister, Rachel, were born to Sutherland and his second wife, Shirley Douglas, daughter of well-known Canadian politician and the "father" of Canada's universal healthcare system, Tommy Douglas.