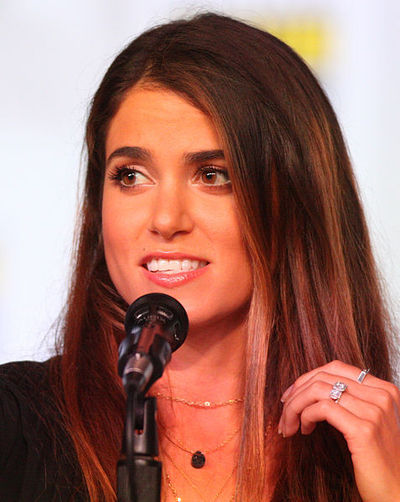 Nicole Houston "Nikki" Reed (born May 17, 1988) is an American film and television actress, screenwriter, singer-songwriter, and model. She became known in 2003, after the release of the film Thirteen, directed by Catherine Hardwicke, for which she was credited with Hardwicke as a co-writer of the screenplay, and in which she played a lead role. Reed has since appeared in several films, including Lords of Dogtown and Mini's First Time. She also portrayed vampire Rosalie Hale in The Twilight Saga (2008–2012).

Reed was born in West Los Angeles, California, the daughter of Cheryl Houston, a beautician, and Seth Reed, a set designer. She has an older brother, Nathan August Reed. Her mother is of Cherokee and Italian descent and is Christian. She raised the children after getting divorced when Reed was two. Her father is Jewish.

Reed has said in numerous interviews that her early home life was "complicated". She was raised solely by her mother. Reed was raised without religion and has identified as Jewish. She grew up around some Jewish practices, as her brother had a Bar Mitzvah.

In 2002 when Reed was 14 years old, she moved out of her mother's house and began living on her own, mainly in apartments in the Los Angeles area. After Thirteen's success, Reed returned to Alexander Hamilton High School in Los Angeles, but dropped out again after a year. She said that "mothers who were sneaking into the school at lunchtime to confront and harass her about the film" were the reason for her departure. She earned a high school diploma through homeschooling. She is a vegetarian.

Catherine Hardwicke, a friend of her mother's, invited her to work on a script with her, when the girl said she was interested in acting. They finished the script for the semi-autobiographical film Thirteen in six days, a relatively short time. Producers asked Reed to play a role in the film because they had trouble casting it, as it was an "uncomfortable" role for most young actresses.

The film starring Evan Rachel Wood was released in 2003 to positive reviews, gaining Reed some recognition in Hollywood as both a screenwriter and an actress. Following this, Reed was invited to appear on The Ellen DeGeneres Show and serve as host on a number of award shows, including the Young Hollywood Awards (2003) and the Independent Spirit Awards Nomination Show, followed by the West Independent Spirits Awards, both in 2004.

Reed has repeatedly been cast as sexually advanced, precocious teenagers, including her character in Lords of Dogtown (2005), also directed by Hardwicke. In early 2006, she appeared on the series The O.C., playing Sadie, a new love interest for the character Ryan Atwood. Reed later appeared on The O.C. at the same time as later Twilight co-stars Cam Gigandet and Jackson Rathbone.

Reed said that her early decision to avoid acting in TV series or in mainstream cinema was naïve. She had thought at the time they were not right for her but gained valuable experience in them.

She had a lead role in Mini's First Time, which received a limited release in the United States on July 14, 2006. Reed played a teenager who, through seduction, involves her stepfather in a plot to murder her mother. Reed has noted that her character does not "understand the weight of consequence." She said she had enjoyed playing someone who she describes as "crass" and having a "trucker's mouth". Reed's character has sex scenes. As Reed was 16 at the time and legally unable to film such scenes in an explicit way, she was filmed from the back to hide her face.

Reed met Paul McDonald, a singer-songwriter and season 10 American Idol contestant, on the red carpet at the premiere of Red Riding Hood in March 2011. This moment was broadcast on an American Idol episode as part of a segment that showed the contestants attending the premiere. The pair began dating, and moved in together not long after. At the MTV Movie Awards on June 5, 2011, Reed was photographed with an engagement ring. Later that month, McDonald confirmed their engagement in an interview. The couple married on October 16, 2011, in Malibu.