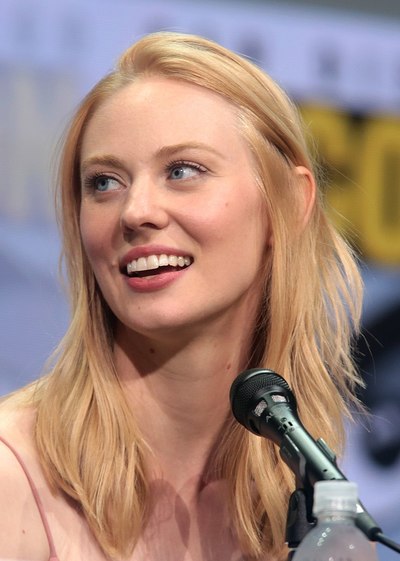 Deborah Ann Woll (born February 7, 1985) is an American actress. She is known for her roles as Jessica Hamby on the HBO drama series True Blood, and currently portrays Karen Page in the Netflix drama series Daredevil, The Defenders, and The Punisher. She has also starred in the films Mother's Day, Someday This Pain Will Be Useful to You, Catch .44, Ruby Sparks, and Meet Me in Montenegro.

Woll was born and raised in Brooklyn, New York City. Her father is an architect and her mother, Cathy Woll, is a teacher at the Berkeley Carroll School. She attended the Packer Collegiate Institute for high school, and received her Bachelor of Fine Arts from USC School of Dramatic Arts at the University of Southern California, graduating in 2007. She also trained at the Royal Academy of Dramatic Arts in London. Woll is of Irish and German descent.

In 2008, Woll landed her breakout role as Bill Compton's vampire progeny, Jessica Hamby, on the HBO fantasy drama television series True Blood. She originally joined as a recurring character in the first season, but was promoted to a regular cast member for the second season. In 2009, she and her True Blood co-stars won the Satellite Award for Best Cast – Television Series at the 14th annual ceremony. Woll maintained the role of Jessica until the series' ending in 2014. In 2009, she made a guest appearance on an episode of Law & Order: Special Victims Unit, portraying a young woman who is found alive after being reported missing by her boyfriend.

In 2010, Woll made her feature film debut in the psychological horror Mother's Day, directed by Darren Lynn Bousman. In 2011, she starred in the supernatural thriller Little Murder, the sports drama Seven Days in Utopia, the action film Catch .44, and the comedy-drama Someday This Pain Will Be Useful to You. The following year, she co-starred in the romantic comedy-drama film Ruby Sparks. In 2013, she performed at the Wallis Annenberg Center for the Performing Arts in the play Parfumerie, alongside Eddie Kaye Thomas and Richard Schiff. That same year, Woll joined the cast of the drama film The Automatic Hate.

In 2015, she starred in the independent romantic drama film Forever, opposite her former True Blood co-star Luke Grimes. Since 2015, Woll has portrayed Karen Page in the Marvel Cinematic Universe series Daredevil for Netflix. She will reprise the role as a regular on The Punisher, scheduled to premiere in 2017, and as a guest star in The Defenders miniseries.