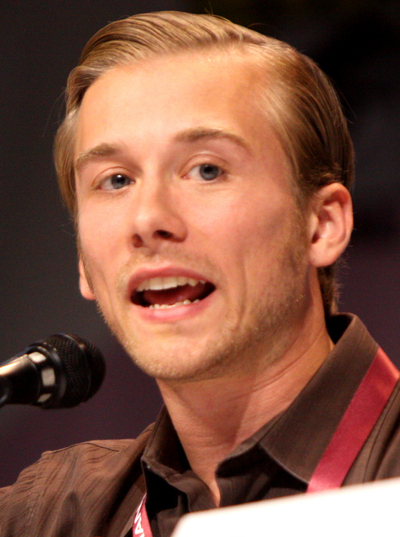 Lou Taylor Pucci (born July 27, 1985) is an American actor who first appeared on film in Rebecca Miller's well-received Personal Velocity: Three Portraits in 2002. Pucci had his breakthrough leading role in the critically acclaimed Thumbsucker (2005), for which he won a Special Jury Prize at the Sundance Film Festival. Pucci went on to star in a multitude of indie films, including The Chumscrubber (2005), Fast Food Nation (2006),The Go-Getter (2007), Explicit Ills (2008), and Carriers (2009). Most recently, Pucci had starring roles in the 2013 Evil Dead remake, as well as The Story of Luke (2013).

Pucci was born in Seaside Heights, New Jersey. His mother, Linda Farver, is a former model and beauty queen, and his father, Louis Pucci, worked as a guitarist for the bands The Watch and Leap of Faith. At the age of two, he moved to Keansburg, New Jersey. A graduate of Christian Brothers Academy in Lincroft, he currently lives in Venice, California.

He first acted at the age of ten in a hometown production of Oliver!. Just two years later he acted as an understudy on Broadway playing Freidrich in The Sound of Music. He can be seen in Arie Posin's The Chumscrubber, the HBO miniseries Empire Falls, and starring as the lead in Mike Mills' film Thumbsucker, for which he received the Special Jury Prize for Acting at the 2005 Sundance Film Festival and the Silver Bear Award for Best Actor at the 2005 Berlin Film Festival. He also played the title character in Green Day's "Jesus of Suburbia" music video.

In 2009, Pucci had three films that screened at the Sundance Film Festival: Brief Interviews with Hideous Men, directed by John Krasinski of The Office; The Informers, with Billy Bob Thornton, Winona Ryder, Kim Basinger and Mickey Rourke, based on Bret Easton Ellis' collection of short stories of the same name; and Arlen Faber (formerly The Dream of the Romans) with Jeff Daniels and Lauren Graham. Pucci was also a juror for the short film competition.

Pucci had roles in multiple indie films for the latter part of the decade, and had a leading role playing an autistic man in The Story of Luke (2013), alongside Seth Green. He also had a starring role in the Evil Dead (2013) remake, based on Sam Raimi's 1981 cult original.