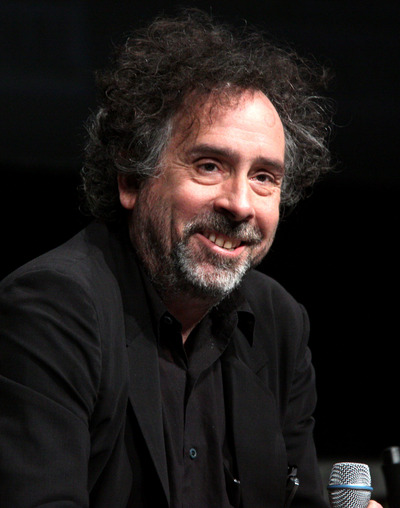 Burton has often worked with Johnny Depp and Danny Elfman, who has composed scores for all but three of the films Burton has directed. Helena Bonham Carter, Burton's former domestic partner, has appeared in many of his films. He wrote and illustrated the poetry book The Melancholy Death of Oyster Boy & Other Stories, published in 1997 by Faber and Faber and a compilation of his drawings, sketches and other artwork, entitled The Art of Tim Burton, was released in 2009. A follow-up to The Art of Tim Burton, entitled The Napkin Art of Tim Burton: Things You Think About in a Bar, containing sketches made by Burton in napkins at bars and restaurants he occasionally visits, was released in 2015.

Burton was born in 1958, in Burbank, California, the son of Jean Burton (née Erickson), later the owner of a cat-themed gift shop, and William "Bill" Burton, a former minor league baseball player who was working for the Burbank Parks and Recreation Department. As a preteen, Burton would make short films in his backyard on Evergreen Street using crude stop motion animation techniques or shoot them on 8 mm film without sound (one of his oldest known juvenile films is The Island of Doctor Agor, which he made when he was 13 years old). Burton attended Providencia Elementary School in Burbank. Burton went to Burbank High School, but he was not a particularly good student. He played on the water polo team at Burbank High. Burton was an introspective person and found pleasure in painting, drawing and watching movies. His future work would be heavily influenced by the works of such childhood heroes as Dr. Seuss and Roald Dahl. After graduating from Burbank High School, Burton attended the California Institute of the Arts in Valencia, California, to study character animation. As a student at CalArts, Burton made the shorts Stalk of the Celery Monster and King and Octopus.

Stalk of the Celery Monster attracted the attention of Walt Disney Productions' animation division, which offered Burton an animator's apprenticeship at the studio. He worked as an animator, storyboard artist, graphic designer, art director and concept artist on films such as The Fox and the Hound (1981), Tron (1982), and The Black Cauldron (1985). His concept art never made it into the finished films.

While at Disney in 1982, Burton made his first short, Vincent, a six-minute black-and-white stop motion film based on a poem written by the filmmaker, and depicting a young boy who fantasizes that he is his hero Vincent Price, with Price himself providing narration. The film was produced by Rick Heinrichs, whom Burton had befriended while working in the concept art department at Disney. The film was shown at the Chicago Film Festival and released, alongside the teen drama Tex, for two weeks in one Los Angeles cinema. This was followed by Burton's first live-action production Hansel and Gretel, a Japanese-themed adaptation of the Brothers Grimm fairy tale for the Disney Channel, which climaxes in a kung fu fight between Hansel and Gretel and the witch. Having aired once in 1983 at 10:30 pm on Halloween and promptly shelved, prints of the film are extremely difficult to locate, fueling rumors that the project did not exist. The short would finally go on public display in 2009 at the Museum of Modern Art, and again in 2011 as part of the Tim Burton art exhibit at LACMA. It was again shown at the Seoul Museum of Art in 2012.

Burton's next live-action short film, Frankenweenie, was released in 1984. It tells the story of a young boy who tries to revive his dog after it is run over by a car. Filmed in black-and-white, it stars Barret Oliver, Shelley Duvall (with whom he would work again in 1986, directing an episode of her Faerie Tale Theatre) and Daniel Stern. After Frankenweenie was completed, Disney fired Burton, under the pretext of him spending the company's resources on doing a film that would be too dark and scary for children to see.

Burton was married to Lena Gieseke, a German-born artist. Their marriage ended in 1991 after four years. He went on to live with model and actress Lisa Marie; she acted in the films he made during their relationship from 1992 to 2001, most notably in Ed Wood and Mars Attacks!. Burton developed a romantic relationship with English actress Helena Bonham Carter, whom he met while filming Planet of the Apes. Marie responded in 2005 by holding an auction of personal belongings that Burton had left behind, much to his dismay.

Close friend Johnny Depp is a godfather of both of Burton's children. In Depp's introduction to Burton on Burton, he writes, "What more can I say about him? He is a brother, a friend, my godson's father. He is a unique and brave soul, someone that I would go to the ends of the earth for, and I know, full and well, he would do the same for me."

On March 15, 2010, Burton received the insignia of Chevalier of Arts and Letters from then-Minister of Culture Frédéric Mitterrand.

Burton was the President of the Jury for the 63rd annual Cannes Film Festival, held from May 12 to 24, 2010 in Cannes, France.

Burton has stated that his favorite films are Dracula A.D. 1972, The Wicker Man, The Golden Voyage of Sinbad, The War of the Gargantuas, and The Omega Man.