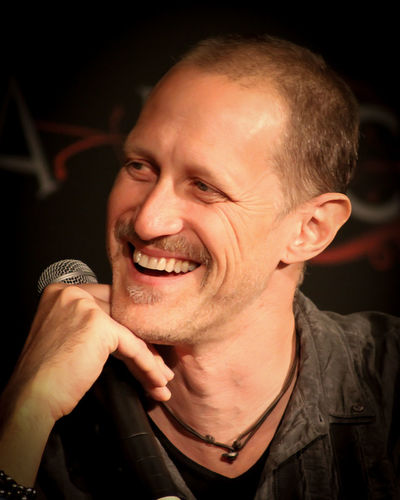 Christopher Heyerdahl (born September 18, 1963) is a Canadian actor, best known for portraying the "Swede" in Hell on Wheels.

Heyerdahl is primarily known for his recurring role as the enigmatic "Swede" in AMC's Hell on Wheels. This post-American Civil War drama debuted as the second highest rated original series in AMC history. He is also known for his role as Leonid in the Are You Afraid of the Dark? episode "The Thirteenth Floor" and as Nosferatu in the episode "Midnight Madness". He played the characters Halling and Wraith commander Todd in Stargate Atlantis, and Pallan in the Stargate SG-1 episode "Revisions". He played H. P. Lovecraft in the film Out of Mind: The Stories of H. P. Lovecraft (1998) and a punk, new at drug dealing, in Cadavres (2009).

His most notable film role was in the feature film New Moon, an adaptation of Stephenie Meyer's second book in her Twilight Saga. In this film, he played a vampire, Marcus, who is part of a powerful Italian family called the Volturi. He reprised that role in both parts of Breaking Dawn, the two part adaption of the fourth book in the Twilight Saga.