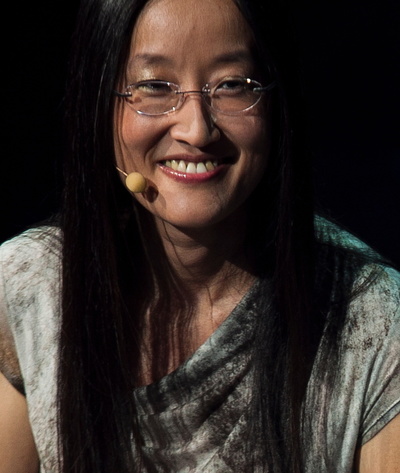 Jennifer Yuh Nelson (born May 7, 1972), also known as Jennifer Yuh, is an American director and storyboard artist. She is best known for her directorial debut in Kung Fu Panda 2 and for directing its sequel Kung Fu Panda 3. Yuh is the first woman to solely direct an animated feature from a major Hollywood studio.

Yuh was born in 1972 in South Korea and immigrated to the United States with her parents and two sisters when she was 4 years old. Yuh spent her childhood in Lakewood, California, where she enjoyed watching martial arts movies, playing with cars, and drawing. "I have been drawing since age 3 and making movies in my head for almost as long. In fact, drawing for me was a way to express those films when I had no other means of doing so," said Yuh. As a young girl, she would sit at the kitchen table for hours and watch her mother draw, copying her every stroke. As a kid, she would fancy stories with her sisters and was learning to draw to get down those stories. Yuh traces the lineage of her career to those formative family experiences.

Interested in art, Yuh followed her sisters to California State University, Long Beach, where she received a Bachelor of Fine Arts in Illustration. There she got introduced to animation, "When I was in college years later, a veteran storyboard artist came to talk to my class. He showed us how he drew movies for a living. My mind exploded. And that led to a career in animation." Jennifer then followed her sisters into an animation business - at first as a cleanup artist at Jetlag Productions, where she worked on various direct-to-video features. In 1997, she got hired as a storyboard artist on HBO's Todd McFarlane's Spawn series.

In 1998, Yuh joined DreamWorks Animation as a storyboard artist, while her sister, Catherine Yuh Rader, also a storyboard artist, had joined DWA owned PDI. Jennifer worked then on Spirit: Stallion of the Cimarron, Sinbad: Legend of the Seven Seas and Madagascar. As a big fan of martial arts movies, she asked to work on the first Kung Fu Panda film, where she was a head of story, and directed the hand-drawn dream sequence. After the release of Kung Fu Panda, Jeffrey Katzenberg, DWA's CEO, approached Yuh about directing Kung Fu Panda 2. Although she hadn't expressed interest in directing the sequel to the film, Producer Melissa Cobb stated that she should direct the second one due to her excellent work on the first, to which the rest of the crew supported the decision. The film proved a major critical and international box office success with a worldwide gross of $665.6 million, making it the highest-grossing film ever directed by a woman, until director Jennifer Lee's Frozen two years later. She held the record for highest-grossing film by a solo female director until the release of Patty Jenkins's 2017 film Wonder Woman. She eventually became the first woman to be nominated for the Academy Award for Best Animated Feature Film (since 2007's Persepolis) and to win the Annie Award for Best Directing in a Feature Production. Jennifer returned for Kung Fu Panda 3, which was released in 2016 and was the first American animated film to ever been co-produced with a Chinese firm. In July 2016, she was also added as one of the board of Governors by Academy of Motion Picture Arts and Sciences.

It was announced in 2016 that Yuh will be making her live action directorial debut for the adaptation of Alexandra Bracken Young Adult Novel, The Darkest Minds.