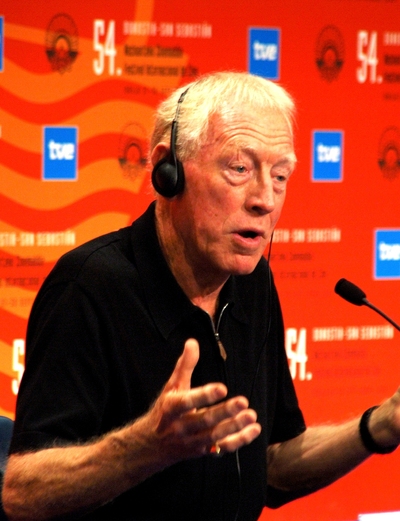 Carl Adolf "Max" von Sydow (born 10 April 1929) is a Swedish actor, who has held French citizenship since 2002. He has starred in many films and had supporting roles in dozens more in many languages, including Swedish, Norwegian, English, Italian, German, Danish, French and Spanish. Von Sydow received the Royal Foundation of Sweden's Cultural Award in 1954, the Commandeur des Arts et des Lettres in 2005 and the Légion d'honneur in 2010.

Some of his most memorable film roles include Knight Antonius Block in Ingmar Bergman's The Seventh Seal (1957), the first of his eleven films with Bergman, and the film that includes the iconic scenes in which he plays chess with Death; Martin in Through a Glass Darkly (1961); Jesus in The Greatest Story Ever Told (1965); Oktober in The Quiller Memorandum (1966); Karl Oskar Nilsson inThe Emigrants (1971); Father Lankester Merrin in The Exorcist (1973); Joubert the assassin in Three Days of the Condor (1975); Ming the Merciless in Flash Gordon (1980); the villain Ernst Stavro Blofeld in the James Bond film Never Say Never Again (1983); Liet-Kynes in Dune (1984); Frederick in Hannah and Her Sisters (1986); Lassefar in Pelle the Conqueror (1987), for which he received his first Academy Award nomination; Dr. Peter Ingham in Awakenings (1990); Lamar Burgess in Minority Report (2002) and The Renter in Extremely Loud and Incredibly Close (2012), which earned him his second Academy Award nomination.

Max von Sydow was born Carl Adolf von Sydow, to a wealthy family, in Lund, Skåne. His father, Carl Wilhelm von Sydow, was an ethnologist and professor of Irish, Scandinavian, and comparative folklore at the University of Lund. His mother, the former Baroness Maria Margareta "Greta" Rappe, was a schoolteacher. Von Sydow was raised as a Lutheran and later became an agnostic.

He attended the Cathedral School of Lund, and learned German and English starting at the age of nine. At school, he and some friends founded an amateur theatre company. He completed National Service before studying at the Royal Dramatic Theatre ("Dramaten") in Stockholm, where he trained between 1948 and 1951 with the likes of Lars Ekborg, Margaretha Krook and Ingrid Thulin. During his time at Dramaten, he made his screen debut in Alf Sjöberg's films Only a Mother (Bara en mor, 1949), and Miss Julie (Fröken Julie, 1951), a screen version of Strindberg's scathing drama.

In 1955, he moved to Malmö, where he met his mentor, Ingmar Bergman. His first work with Bergman occurred on stage at the Malmö Municipal Theatre. Von Sydow later would work with Bergman on films such as The Seventh Seal (Det sjunde inseglet, 1957), Wild Strawberries (Smultronstället, 1957) and The Virgin Spring (Jungfrukällan, 1960). In The Seventh Seal, von Sydow is the knight who plays a chess game with Death. The chess scenes and the film were international breakthroughs for actor and director alike. It was in these films where von Sydow honed and perfected his craft.

On 1 August 1951, von Sydow married actress Christina Inga Britta Olin (born 1926 – died 1998); the couple had two sons, Clas and Henrik, who appeared with him in the film Hawaii, playing his son at different ages. He and Olin divorced on 26 February 1979.