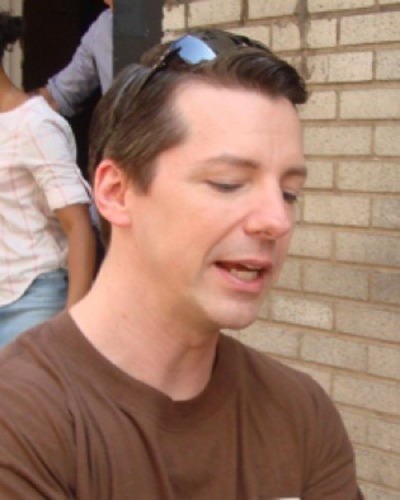 Sean Patrick Hayes (born June 26, 1970) is an American actor, voice artist, and comedian. He is widely known for his role as Jack McFarland in the NBC sitcom Will & Grace, for which he won an Emmy Award, four SAG Awards, one American Comedy Award, and six Golden Globes nominations. He also portrayed comedian Jerry Lewis in the made-for-TV movie Martin and Lewis.

Hayes was born in Chicago, Illinois, the son of Mary, the director of a non-profit food bank, and Ronald Hayes, a lithographer. He is of Irish descent and was raised as a Roman Catholic. After graduating from Glenbard West High School in Glen Ellyn, Illinois, Hayes attended Illinois State University. There he studied piano performance and conducting, with a special focus on the music of Mozart, but he left before graduating. He received an honorary Ph.D. from Illinois State on February 21, 2013.

He worked as a classical pianist, and served as a music director at the Pheasant Run Theater in St. Charles, Illinois. He also composed original music for a production of Antigone at the Steppenwolf Theatre Company in Chicago.

Hayes moved to Los Angeles in 1995, where he found work as a stand-up comedian, stage actor and as an actor in television commercials, including the 1998 Doritos ad, featuring Ali Landry, which aired during the Super Bowl.

As a teenager, Hayes was an extra in Winona Ryder's first movie, Lucas (1986), which was filmed at his high school, Glenbard West. He made his professional film debut in the independent film Billy's Hollywood Screen Kiss (1998), which brought him wide attention and caught the attention of executives who cast him in the NBC comedy television series Will & Grace, as Jack McFarland, a flamboyantly gay, frequently unemployed actor. The show became a long-running hit and Hayes’ performance as Jack earned him seven consecutive Emmy Award nominations (2000–06) as Outstanding Supporting Actor in a Comedy Series. He won the Emmy for his first nomination. He was nominated for six Golden Globe Awards for his performance.