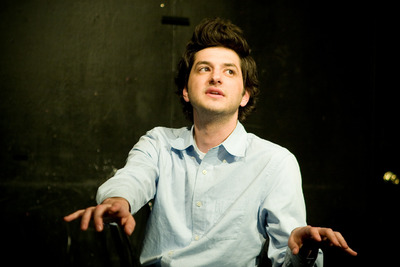 Ben Schwartz (born September 15, 1981) is an American actor, comedian, and writer. He is perhaps best known for portraying a fictional version of himself on the comedy web series Jake and Amir and for portraying Tom Haverford's friend Jean-Ralphio Saperstein on the sitcom Parks and Recreation.  In 2012, he joined Showtime's television comedy House of Lies as the ambitious, brash, and insecure management consultant Clyde Oberholt.

His feature film credits include Peep World with Rainn Wilson, Michael C. Hall and Sarah Silverman as well as Everybody's Fine with Robert De Niro. Additionally he had a role in The Other Guys starring Will Ferrell and Mark Wahlberg and directed by Adam McKay.

On television, Schwartz guest-starred as Jean-Ralphio Saperstein on NBC’s Parks and Recreation and is a lead in the Showtime show House of Lies with Don Cheadle and Kristen Bell. In 2010, Schwartz played series regular Bill Hoyt on J. J. Abrams' one-hour spy drama Undercovers for NBC.

Schwartz has been writing, directing and acting in his own short films for some time. He had his own segment on HBO’s Funny or Die Presents called Terrible Decisions with Ben Schwartz and has appeared in multiple College Humor sketches including the popular web series Jake and Amir. Schwartz has been nominated for two Emmys and won the 2009 Emmy Award for Outstanding Writing for a Variety, Music or Comedy Special for coauthoring Hugh Jackman's opening number for the 81st Academy Awards.

Schwartz grew up in Riverdale, a neighborhood in the Bronx in New York City. In an interview with Kevin Pollak, he stated, "When I told people I was from the Bronx, it was like 'Oh, do you have bullet wounds?' And I'm like 'No, it's just me and, like, Jewish people.'"

Schwartz grew up in a family of social workers and Bronx school teachers, including his mother, a music teacher. He graduated from Union College in 2003 with a double major in psychology and anthropology.