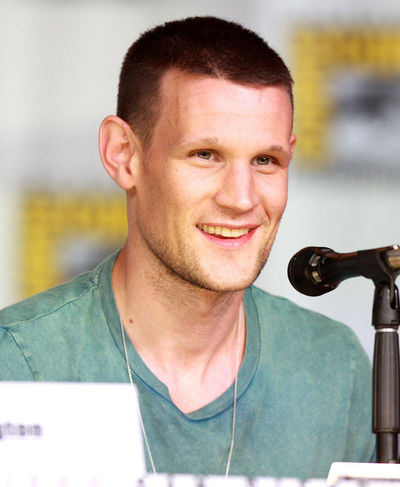 Matthew Robert Smith (born 28 October 1982) is an English actor and voice actor. He is best known for his role as the 11th incarnation of The Doctor in the BBC series Doctor Who.

Smith initially aspired to be a professional footballer, but spondylolysis forced him out of the sport. After joining the National Youth Theatre and studying Drama and Creative Writing at the University of East Anglia, he became an actor in 2003, performing in plays like Murder in the Cathedral, Fresh Kills, The History Boys, and On the Shore of the Wide World in London theatres. Extending his repertoire into West End theatre, he has since performed in the stage adaptation of Swimming with Sharks with Christian Slater, followed a year later by a critically acclaimed performance as Henry in That Face.

Smith's first television role came in 2006 as Jim Taylor in the BBC adaptations of Philip Pullman's The Ruby in the Smoke and The Shadow in the North, while his first major role in television came as Danny in the 2007 BBC series Party Animals. Smith, who was announced as the eleventh incarnation of the Doctor in January 2009, is the youngest person to play the character in the British television series. He left the series at the end of the 2013 Christmas Day special, "The Time of the Doctor". He portrayed the physical embodiment of Skynet in Terminator Genisys (2015). Since 2016, he portrays Prince Philip, Duke of Edinburgh in Peter Morgan's Netflix biographical drama series The Crown.

Matthew Robert Smith was born on 28 October 1982 in Northampton, Northamptonshire, where he was raised. He is the son of David and Lynne Smith. He has a sister named Laura Jayne, who was one of the dancers featured in the music video for Eric Prydz's song "Call on Me" (2004). He attended Northampton School for Boys and had planned to be a professional football player, having played for the youth teams of Northampton Town, Nottingham Forest, and Leicester City. After a serious back injury ruined this career, his drama teacher introduced him to acting by signing him up as the tenth juror in an adaptation of Twelve Angry Men without his consent. Although he took part in the play, he refused to attend a drama festival for which his teacher had also signed him up, as he saw himself as a football player and did not view acting as socially acceptable. His drama teacher persisted, and eventually persuaded him to join the National Youth Theatre in London.

After leaving school, Smith studied drama and creative writing at the University of East Anglia, graduating in 2005. His first theatre roles as part of the National Youth Theatre were Thomas Becket in Murder in the Cathedral and Bassoon in The Master and Margarita. His role in the latter earned him an agent and his first professional jobs, Fresh Kills and On the Shore of the Wide World. His new professional roles led him to seek an agreement with his university so that he could graduate without attending lectures in his final year.

Smith's first television role was as Jim Taylor in the BBC adaptations of the Sally Lockhart quartet books The Ruby in the Smoke and The Shadow in the North. His first major television role came in the television series Party Animals, a BBC television drama series about fictional parliamentary advisors and researchers in Westminster. In Party Animals, Smith portrays Danny Foster, a parliamentary researcher to Jo Porter (Raquel Cassidy), a Labour politician and junior Home Office minister. At 26 years old, Danny is described as an intelligent but timid "politics geek" who should have moved on from researching at his age. Within the series' narrative, he attempts to balance his affections for Kirsty MacKenzie (Andrea Riseborough), his intern, while trying to prevent Porter's imminent decline.

In an interview in 2007, Smith discussed his character's motivations. He summarised Danny as having a romantic outlook of the political world while being cynical elsewhere. The character was drawn into politics by his father and his own political drive. He defended his character's age by characterising him as being loyal to Porter, instead of being incompetent. He talked about his character's emotional and intellectual maturity: emotionally, he lacks confidence around women—most notably seen with his unrequited love towards Kirsty—but Smith portrays Danny as a caring and sensitive but "wry, sarcastic, [and] witty" romantic; and intellectually, Danny is portrayed as attentive and possessing a strong work ethic.

Smith was revealed as the Eleventh Doctor in the British science-fiction television series Doctor Who in January 2009 to replace David Tennant, who announced his departure in October 2008. Smith was a relatively unknown actor compared to the actors then speculated about possibly taking on the role, who included Paterson Joseph, David Morrissey, Sean Pertwee, James Nesbitt, Russell Tovey, Catherine Zeta-Jones, Chiwetel Ejiofor, Robert Carlyle, and Billie Piper. Smith was first named as a possible successor less than a day before he was announced as the Eleventh Doctor, on edition of 3 January 2009 of BBC Breakfast, among the names speculated about. His obscurity prompted the news headline "Doctor Who?", a riff on the show's title.

Smith was one of the earliest actors to audition for the role, performing on the first day. The production team, consisting of the incoming producer, Steven Moffat, and BBC Wales Head of Drama and executive producer, Piers Wenger, immediately singled him out based on his performance. Smith additionally auditioned for the role of John Watson in the Moffat-created Sherlock, undergoing auditions at the same time; he was unsuccessful, as Moffat believed his eccentric acting style was closer to Holmes, whose role had already been given to Benedict Cumberbatch. At 26 years old, Smith was three years younger than Peter Davison was at the time of his casting as the Doctor in 1981, and younger than any other actor suggested for the role. After three weeks of auditions, Moffat and Wenger agreed that it had "always been Matt" and approached him to accept the role. The BBC were cautious about casting him because they felt that a 26-year-old could not play the Doctor adequately; Wenger shared the same sentiment but thought Smith had proven his acting quality in Party Animals, which Wenger thought highlighted Smith's "mercurial qualities". Some fans of the show believed that Smith was inexperienced and too young for the role, while others supported him by citing his demonstrated acting ability. For his performance in his first series, he was nominated in the Outstanding Drama Performance Category of the National Television Awards. Smith is the first Doctor to be nominated for a BAFTA for Best Actor.

Smith has said of his character: "The Doctor is excited and fascinated by the tiniest of things. By everything. By every single thing. That's what's wonderful about him as a character. It's why children like him, I think. Because he doesn't dismiss anything. He's not cynical. He's open to every single facet of the universe." In June 2010, Smith appeared on stage with Orbital, and performed with them a version of the Doctor Who theme, at the Glastonbury Festival. Smith hosted the Doctor Who Prom at the Royal Albert Hall on 24–25 July 2010. On the morning of 26 May 2012, Smith carried the Olympic torch in Cardiff, an activity which was noted by Doctor Who fans for its resemblance to a 2006 episode of the show in which the Doctor carried the torch. On 1 June 2013, the BBC announced that Smith would be leaving Doctor Who at the end of the 2013 Christmas special.

Smith starred in the 2009 short film Together and the 2010 film Womb. In February 2013, it was reported that Smith had signed up to appear in Ryan Gosling's directorial debut Lost River. Smith's directorial debut, the short film Cargese, was aired on Sky Arts in May 2013. Smith had a supporting role, as the embodiment of Skynet, in Terminator Genisys (2015); he is set to have more screen time in the sixth and seventh films in the series. On 20 November 2014, it was announced that Smith will star in the action-thriller film Patient Zero.

During Smith's tenure in On the Shore of the Wide World, the play transferred to the Royal National Theatre in London. After finishing the play, he took on the role of Lockwood, a pupil in the Alan Bennett play The History Boys. After The History Boys, he acted in the teen play Burn/Chatroom/Citizenship and with Christian Slater in Swimming with Sharks, the latter being his West End début.

In 2007, Smith appeared as Henry in the Polly Stenham play That Face at the Royal Court Theatre Upstairs in Chelsea. The play transferred to the Duke of York's Theatre in the West End in 2008 and became Smith's second role there. That Face focuses primarily upon alcohol and drug addiction in an upper-middle-class family after the paternal figure in the family leaves. As Henry, Smith portrayed an aspiring artist who left school to take care of his mother. To prepare for the role, the cast interviewed alcoholics and their families. Smith discussed his character's relationship with his mother in a May 2008 interview with the Evening Standard.

“    The thing I find tricky to get my head round is why doesn't he just leave? An awful lot of it is codependency. [...] With Henry there's a real belief—or denial maybe—that he can change his mother. When she is finally pulled away from him to go to rehab, his identity collapses. His sacrifice has been for nothing.    ”

The entire cast of the play was nominated for the 2008 Laurence Olivier Award for Outstanding Achievement in an Affiliate Theatre, and Smith won the Evening Standard's award for "best newcomer" for his role. Upon its transfer to the West End, Smith's performance as Henry was highlighted as one of the positive aspects of the play by critics for the Evening Standard, Daily Express, The Guardian, and The Times.

On 7 October 2013, it was announced Smith would portray Patrick Bateman in the musical adaption of American Psycho at London's Almeida Theatre. The show began its run in December 2013.

Smith is an atheist and an avid supporter of Blackburn Rovers F.C.. He has cited his favourite band, Radiohead, as an inspiration.