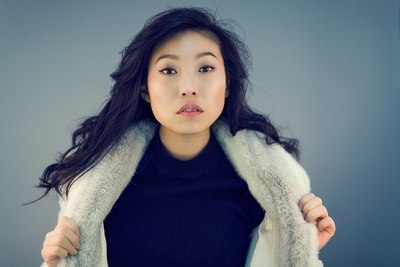 Nora Lum, known by the stage name Awkwafina, is an American rapper, television personality, and actress.

Nora Lum was born in New York City, to a Chinese American father, Wally, and a South Korean immigrant mother, a painter. She grew up in Forest Hills, Queens, New York. Her great-grandfather was a Chinese immigrant in the 1940s who opened the Cantonese restaurant Lum’s in Flushing, Queens. Lum's mother died when she was four, and she was raised and influenced heavily by her grandmother.

Lum attended LaGuardia High School where she played trumpet and was trained in classical and jazz music. At age 16, she adopted the stage name Awkwafina, "definitely a person I repressed" and an alter ego to her "quiet and more passive" personality during her college years. Lum majored in journalism and women's studies at The University at Albany. From 2006 to 2008, Lum attended the Beijing Language and Culture University in Beijing, China, where she studied Mandarin.

Prior to her career in entertainment, she was an intern at local New York publications Gotham Gazette and Times Union, and was a publicity assistant for publishing house Rodale.

Lum began rapping at age 13. In 2012, she gained popularity for her song "My Vag", a response to Mickey Avalon's "My Dick". The music video has garnered over two million views on YouTube. Her solo album Yellow Ranger was released on February 11, 2014. The EP includes a number of her previous singles released via YouTube, including the title track "Yellow Ranger", "Queef" and "NYC Bitche$".

She was part of the lineup at Tenacious D's Festival Supreme on October 25, 2014. In 2016, she collaborated with comedian Margaret Cho on "Green Tea", a song that pokes fun at Asian stereotypes.

In 2016, Lum played a supporting role in Neighbors 2: Sorority Rising and starred in the indie comedy Dude. She also appeared in the 2016 animated comedy Storks.

In April 2017, she was announced to be part of the cast of Warner Bros. film Crazy Rich Asians as Peik Lin, a college friend of Rachel Chu played by Constance Wu.

In April 2018, she was announced as part of the cast of Paradise Hills, a sci-fi thriller directed by Alice Waddington and featuring Emma Roberts, Eiza Gonzalez and Danielle Macdonald.

She is part of the principal cast in the all-female spinoff to the Ocean's Trilogy, Ocean's 8, which was released on June 8, 2018.

In 2014, Lum was added to the cast of the third season of Girl Code. In 2015, she served as a co-host with TV personality Nessa and comedian Carly Aquilino for the spin-off titled Girl Code Live on MTV.

Lum was the host of self-created short-form web series "Tawk", which was an Official Honoree at the 2016 Webby Awards and was nominated for a 2016 Streamy Award in the News and Culture category.

She has a recurring role in the Hulu original series Future Man, which was released in November 2017.

Lum is profiled in the documentary Bad Rap, which was an official selection at the 2016 Tribeca Film Festival. Produced by Salima Koroma and Jaeki Cho, the film puts the spotlight on her as well as upcoming fellow Asian-American rappers such as Dumbfoundead, Rekstizzy, and Lyricks.

Lum has expressed support for Time's Up, a movement started by Hollywood celebrities against sexual harassment. She has also advocated for the need for more female directors and against the stereotyping of Asians in media. She has rejected roles that require accents.

Lum was honored as Kore Asian Media's Female Breakout of the Year in December 2017.

Lum was featured in Gap's "Logo Remix" campaign, which featured up-and-coming artists who "are remixing creative culture on their own terms," such as SZA, Sabrina Claudio and Naomi Watanabe.

Awkwafina plays the role of Katy in Shang-Chi and the Legend of the Ten Rings.