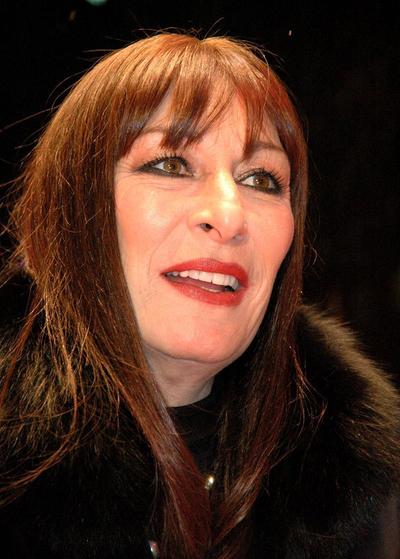 Anjelica Huston (born July 8, 1951) is an American actress. Huston became the third generation of her family to win an Academy Award, for her performance in 1985's Prizzi's Honor, joining her father, director John Huston, and grandfather, actor Walter Huston. She later was nominated in 1989 and 1990 for her acting in Enemies, a Love Story and The Grifters respectively. Among her roles, she starred as Morticia Addams in The Addams Family (1991) and Addams Family Values (1993), receiving Golden Globe nominations for both. Huston also played the Grand High Witch in the children's movie The Witches in 1990 and is, more recently, known for her frequent collaborations with director Wes Anderson. She currently stars on the NBC musical drama Smash.

Anjelica Huston was born in Santa Monica, California, and is the daughter of director and actor John Huston and Italian–American prima ballerina Enrica 'Ricki' (née Soma), from New York. Huston's paternal grandfather was Canadian-born actor Walter Huston. Huston spent most of her childhood in Ireland and England. She grew up in Saint Clerans House near Craughwell, County Galway. In the late 1960's, she began taking a few small roles in her father's movies. She started very small indeed, substituting her hands for Deborah Kerr's in the British Casino Royale (1967 film) and advanced to bigger roles in 1969, starring, for example, in A Walk with Love and Death, where she played the 16 year old French noblewoman Claudia. In the same year, her mother, who was 39 years old, died in a car accident, and Anjelica relocated to the US, where she modeled for several years. While she modeled, she worked with photographers such as Richard Avedon and Bob Richardson.

Huston has an older brother, Tony, a younger maternal half-sister named Allegra, whom she called "Legs", and a younger paternal half-brother, actor Danny Huston. She is the aunt of Boardwalk Empire actor Jack Huston.

Deciding to focus more on movies, in the early 1980s she studied acting. Her first notable role was in Bob Rafelson's remake of The Postman Always Rings Twice (1981). Later, her father cast her as Maerose, daughter of a Mafia don whose love is scorned by a hit man (Jack Nicholson) in the film adaptation of Richard Condon's Mafia-satire novel Prizzi's Honor (1985). Huston won the Best Supporting Actress Oscar for her performance, making her the first person in Academy Award history to win an Oscar when a parent and a grandparent had also won one.

While working as a model in her teens during the late 1960s, Huston had a relationship with photographer Bob Richardson, who was 23 years her senior. Her on-and-off relationship with actor Jack Nicholson spanned from 1973 to 1989.

On May 23, 1992, she married sculptor Robert Graham. The couple lived in Venice, California, until his death on December 27, 2008. They never had any children.