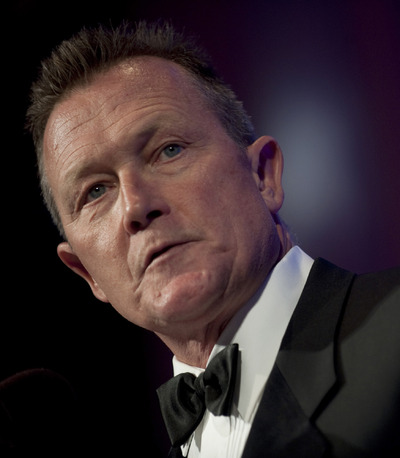 Robert Hammond Patrick, Jr.(born November 5, 1958) is an American actor, known for his work in the science fiction genre. He is a Saturn Award-winner.

Patrick dropped out of college when drama class sparked his interest in acting, receiving his first professional acting job in the 1986 television film, Eye of the Eagle. He went on to appear in supporting roles in such motion pictures as Die Hard 2,Terminator 2: Judgment Day, Wayne's World, Last Action Hero, Fire in the Sky, Cop Land, The Faculty, Walk the Line, Bridge to Terabithia, Spy Kids and Flags of Our Fathers. Patrick also starred in popular television shows such as The Sopranos, The Outer Limits, Elvis, The Unit, and The X-Files as FBI Special Agent John Doggett. He recently teamed up again with The Unit writer Shawn Ryan for the TV series Last Resort.

Allmovie described Patrick as having "developed a solid reputation within the industry", with critics, fans and co-stars praising "his work ethic, personality, and consistent performances".

Patrick, the oldest of five siblings, was born in Marietta, Georgia, the son of Nadine and Robert Patrick, Sr., a banker. His siblings are Richard (who is the lead singer for the rock band, Filter), Cheri, Karen, and Lewis. He spent his early life in Bay Village, a small suburb of Cleveland, Ohio, while he moved around the country. Patrick did not start to pursue an acting career until his mid-twenties. During his childhood years, Patrick did not like to act. In third grade he refused to wear a pair of green tights required for Peter Pan. He graduated from Farmington High School in Farmington, Michigan in 1977. Patrick was a track and field and football athlete at Bowling Green State University, although he dropped out before graduating when he found interest in drama and acting.

After leaving college, Patrick got a job as a house painter and continued as such until a boating accident in 1984 in Lake Erie. He swam for three hours in order to save the others still stranded on the accident site, nearly drowning in the attempt. After the accident, he moved from Ohio to Los Angeles, California at the age of 26. His main income during the first years was as a bartender, and he often lived in his car. Patrick was then picked up for various small roles and cameos in low budget films. Looking back, Patrick credited his early appearances in films for his "tough-looking exterior".

Prior to starring in Terminator 2: Judgment Day, Patrick made a short appearance in Die Hard 2 as the main villain's henchman. In 1990, he was cast in the role of T-1000 in Terminator 2. James Cameron, the director of the film, said he chose Patrick for the role because of his physical appearance, which he felt fit the role. During the filming of Terminator 2, Patrick was "broke", living in a cheap apartment with his girlfriend, Barbara, whom he married during filming of Terminator 2. He has credited the film for starting his career.