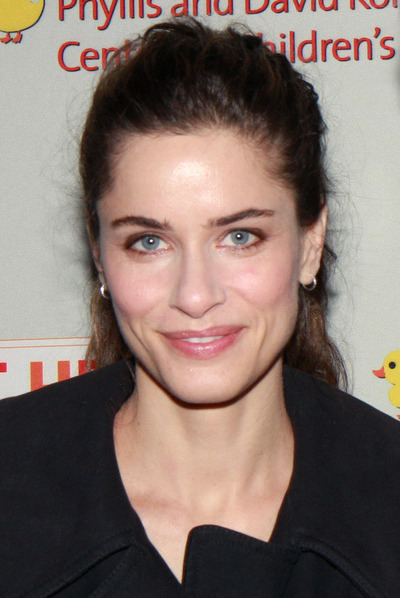 Amanda Peet (born January 11, 1972) is an American actress, who has appeared on film, stage, and television. After studying with Uta Hagen at Columbia University, Peet began her career in television commercials, and progressed to small roles on television, before making her film debut in 1995. Featured roles in films such as the 2000 comedy film The Whole Nine Yards brought her wider recognition.

She has appeared in a variety of films, including the 2001 comedy Saving Silverman, the 2003 romantic comedy Something's Gotta Give, the 2003 psychological thriller film Identity, the 2005 action-thriller Syriana, the 2006 comedy-drama remake Griffin & Phoenix, the 2007 romantic comedy The Ex, the 2008 science fiction film The X-Files: I Want to Believe and the 2009 disaster adventure drama 2012. She has also appeared in the 1999 drama series Jack & Jill and the 2006 drama series Studio 60 on the Sunset Strip.

Peet was born in New York City, the daughter of Penny (née Levy), a social worker, and Charles D. Peet, Jr., a corporate lawyer. Her parents are divorced. Her maternal great-grandfathers were Samuel Levy, a lawyer, businessman, and public official, who served as Manhattan Borough President, and Samuel Roxy Rothafel, a theatrical impresario and entrepreneur. Peet's father is a Quaker and Peet's mother is Jewish. Peet attended Friends Seminary, then studied history at and graduated from Columbia University, where she auditioned for acting teacher Uta Hagen and decided to become an actress after taking Hagen's class. During her four-year period of study with Hagen, Peet appeared in the off-Broadway revival of Clifford Odets's Awake and Sing with Stephen Lang.

Peet's first screen performance was in a television commercial for Skittles. She made her film debut in the drama film Animal Room (1995), which also starred Neil Patrick Harris and Matthew Lillard. For much of the late 1990s, Peet maintained a steady acting career in relatively obscure independent films. Her next feature film was One Fine Day. The film was released in late 1996, and she co-appeared with George Clooney and Michelle Pfeiffer. Also that year, she portrayed a supporting role in the romantic comedy film She's the One, opposite Jennifer Aniston and Cameron Diaz.

After several small and supporting roles in 1998's Origin of the Species, Southie and Playing by Heart, Peet had her first major role as Jacqueline Barrett in the 1999 WB network series Jack & Jill (which aired for two seasons). Her character was played by Amelia Heinle in the pilot. However, Heinle was replaced by Peet after the series was picked up. She also appeared in the eighth-season finale of Seinfeld ("The Summer of George") as a waitress whom Jerry Seinfeld meets. In 1999, Peet was cast opposite Sarah Michelle Gellar in the fantasy romantic comedy Simply Irresistible. Her character in the film was Chris, the former girlfriend of Sean Patrick Flanery's character, Tom.