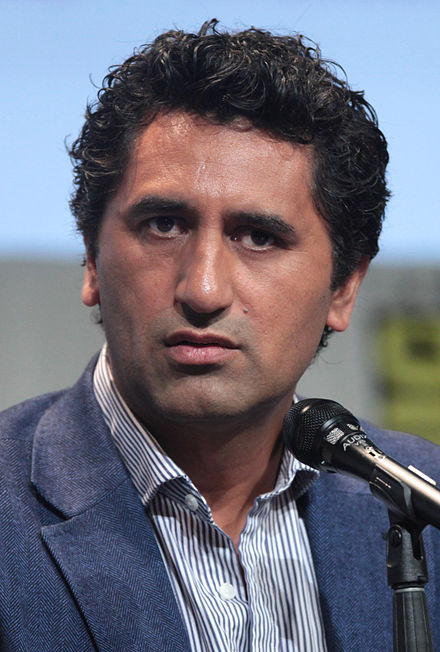 Clifford Vivian Devon "Cliff" Curtis (born 27 July 1968) is a New Zealand actor whose film credits include Whale Rider, Once Were Warriors, Blow, and The Dark Horse. He had television series roles on NBC's Trauma and Body of Proof, and ABC's Missing. He currently plays Travis, a lead character on the AMC horror-drama series Fear the Walking Dead, a companion series of The Walking Dead.  Ethnically Māori, his many character roles have included a range of ethnicities, such as Latin American and Arab. Curtis is co-owner of the independent New Zealand production company Whenua Films.

Curtis, one of nine children, was born in Rotorua, in the North Island of New Zealand, and is the son of an amateur dancer. Curtis is of Māori descent and his tribal affiliations are Te Arawa and Ngāti Hauiti.

As a boy he studied mau rākau, a traditional Māori form of taiaha fighting with Māori elder Mita Mohi on Mokoia Island, which nurtured his abilities as a performer in kapa haka. Curtis later performed as a breakdancer and then competitively in rock 'n' roll dance competitions. He received his secondary education at Western Heights High School, Rotorua.

Curtis started acting in amateur productions of musicals Fiddler on the Roof and Man of La Mancha with the Kapiti Players and the Mantis Cooperative Theatre Company, before attending the New Zealand Drama School and Teatro Dimitri Scoula in Switzerland. He worked at a number of New Zealand theatre companies, including Downstage, Mercury Theatre, Bats Theatre, and Centre Point. His stage roles include Happy End, The Merry Wives of Windsor, Othello, The Cherry Orchard, Porgy and Bess, Weeds, Macbeth, Serious Money, and The End of the Golden Weather.

His first feature film role was a small part in the Oscar-nominated Jane Campion film The Piano. He went on to win attention in Once Were Warriors, one of the most successful films released on New Zealand soil and the line "Uncle f**ken Bully" whom Cliff Curtis played and spoken by "Jake the Muss" Temuera Morrison, became one of New Zealand films most memorable and quoted lines, as well as being part of the "Kiwiana" zeitgeist. He also played a seducer in the melodrama Desperate Remedies. In 2000 Curtis starred as family man Billy Williams in Jubilee, before playing father to the title character in the international hit Whale Rider.

In 2004 with producer Ainsley Gardiner, Curtis formed independent film production company Whenua Films. The goals of the company are to support the growth of the New Zealand indigenous filmmaking scene, and support local short filmmakers. He and Gardiner were appointed to manage the development and production of films for the Short Films Fund for 2005-06 by the New Zealand Film Commission. They have produced several shorts under the new company banner, notably Two Cars, One Night, which received an Academy Award nomination in 2005, and Hawaiki by director Mike Jonathan in 2006. Both short films circulated through many of the prestigious international film festivals like the Berlinale.

At the 2006 Cannes Film Festival, Miramax Films bought US distribution rights to their first feature film, a relationship comedy titled Eagle vs Shark, directed by Taika Waititi. Waititi's follow-up feature Boy, also from Whenua Films, went on to become the highest grossing New Zealand film released on its own soil.

Curtis has appeared in films such as Three Kings, the Johnny Depp drug drama Blow, Martin Scorsese's Bringing Out the Dead, Sunshine and Live Free or Die Hard in 2007, Training Day, Collateral Damage, and Push in 2009.

In M. Night Shyamalan's The Last Airbender (released in 2010), he played the main villain, Fire Lord Ozai. Curtis portrayed Lt. Cortez in the 2015 film Last Knights and will play the role of Jesus Christ in the 2016 film Risen.

On December 4, 2014, it was officially announced that Curtis had been cast as Travis, the leading male role of the AMC series Fear the Walking Dead, the official spin-off of The Walking Dead.

Curtiss stars as Yeshua (Jesus) of Nazareth in the 2016 film Risen.

Curtis guards his personal life closely. He married in late 2009 in a lavish private ceremony at his home marae.