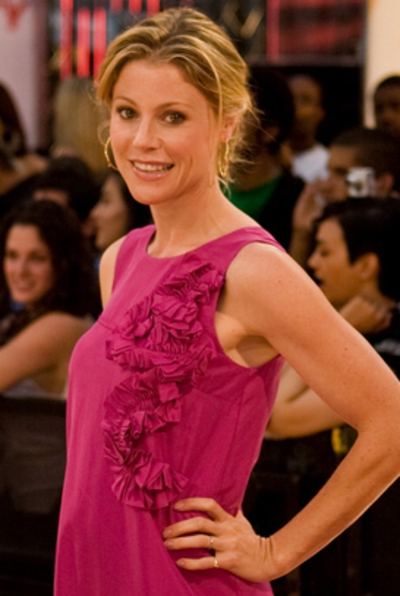 Julie Bowen (born March 3, 1970) is an American film and television actress who is known for playing Carol Vessey on Ed (2000–2004), Denise Bauer on Boston Legal (2005–2007) and Claire Dunphy on the sitcom Modern Family (2009–present), with the latter earning her four nominations for the Primetime Emmy Award for Outstanding Supporting Actress in a Comedy Series, winning in 2011 and 2012.

Bowen was born Julie Bowen Luetkemeyer in Baltimore, Maryland, the middle of three daughters of Suzanne (née Frey) and John Alexander Luetkemeyer, Jr., a commercial real estate developer. She is of German, English, Irish, Scottish, and French descent; one of her paternal great-great-grandfathers was John V. Le Moyne, a Representative from Illinois, and one of her three times great-grandfathers was Pittsburgh mayor Magnus Miller Murray. Her older sister, Molly Luetkemeyer, is an interior designer who has appeared on Clean Sweep, and her younger sister, Annie Luetkemeyer, is a doctor at the University of California, San Francisco in the HIV/AIDS Division. Her parents were socially prominent in Baltimore. Raised in suburban Ruxton, she first attended Calvert School, then Garrison Forest School, and also attended St. George's School, Newport, in Rhode Island. She matriculated at Brown University, majoring in Italian Renaissance studies. In her junior year, Bowen spent a year in Florence, Italy. During college, she had roles in Guys and Dolls, Stage Door, and Lemon Sky. Before graduating, Bowen had the lead role in the independent film Five Spot Jewel. Among other places, Bowen studied acting at the Actor's Institute.

After graduation, Bowen had a role in the soap opera Loving and made her prime-time debut on an episode of the college drama Class of '96. She also had the lead role in the 1994 television film Runaway Daughters, opposite Paul Rudd.

In films, Bowen played the love interest of the title character in Happy Gilmore. Roles in other films include An American Werewolf in Paris and Multiplicity. On television, she has had guest roles on Party of Five, Strange Luck, and a recurring role on ER as the girlfriend of Dr. Carter. On the sketch comedy program Stella Shorts, Bowen played an angel in the "Raking Leaves" episode.

Bowen first gained prominence on the television series Ed, where she played high school English teacher Carol Vessey, the love interest of the protagonist, Ed Stevens. Bowen then guest starred as Sarah Shephard in five episodes of Lost. In the fall of 2005, Bowen joined the cast of Boston Legal, playing attorney Denise Bauer. She left the series in 2007 and returned for guest appearances in 2008. In 2008, she had a recurring role on Weeds, playing Silas's love interest, Lisa.

Since fall 2009, Bowen has co-starred on the ABC sitcom Modern Family, playing Claire Dunphy. For her portrayal, Bowen received four consecutive Primetime Emmy Award nominations for Outstanding Supporting Actress in a Comedy Series (2010-13), winning the award in 2011 and 2012.